Stronger representation and advocacy for women’s rights in Vietnam 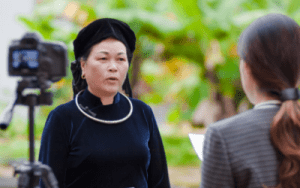 To achieve this, the project focuses on a combination of skills-building, lobbying/advocacy and organisational backing by key Vietnamese institutions.

In 2011, APHEDA in partnership with Irish Aid, supported a similar project in the lead up to the 2016 national elections. Of the 300 women candidates, 203 were elected (68%). Of the 203, 68% were standing for election for the first time. An important side effect was a noticeable increase in the number of women turning out to vote.

In this current project phase in the lead up to the 2021 national election, the project has set itself the ambitious target of having 677 women standing for election.

The implementing partner organisation for this project, the 8 March Center, was set up by the Hai Duong Women’s Union to commemorate the significance of International Women’s Day. The Centre provides a platform to improve the status of women and also facilitates women’s empowerment. It also runs wellbeing activities under the guidance of the Hai Duong Women’s Union. Hai Duong province is a growing industrial area where large migrant and local women work in the garment textile and other industries.

In the past twelve months, the project has:

Learning and exchange with Australia

The focus of the next twelve months will be on increasing the number of women nominated as potential candidates for election and supporting nominees to effectively campaign and receive enough local support to be elected for the next 5 year term of 2021-2026. Parallel to this, is building effective skills in representation to ensure that, if elected, the candidates offer strong leadership and translate women’s representation in the political process into concrete wins for women’s equality in Vietnam.

APHEDA’s Vietnam Country Manager will lead a delegation to Australia in 2019 of women candidates to exchange and learn with Australian women MPs.

Become a Global Justice Partner today and contribute to Union Aid Abroad – APHEDA’s work in Vietnam and our other projects. Yes, sign me up!