Union Aid Abroad – APHEDA has supported many important projects in Timor Leste since Independence was achieved in the 1999 national referendum. Some of our current projects include strengthening and supporting rural farmer organisations; providing advocacy, training and assistance for domestic workers aiming for fair remuneration and decent working conditions; and advocating for workers’ rights and providing campaign and leadership development training for unions. Here is a Project Update on the Working Women’s Centre Timor Leste’s project – ‘Advocacy, Education and Supporting Timorese Domestic Workers to get Legal Protection & Decent Work’. 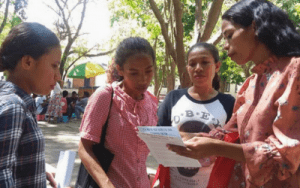 The founding of the Working Women’s Centre of Timor Leste (WWCTL) came about after recently retired feminist warrior, Sandra Dann from the Working Women’s Centre South Australia hosted APHEDA Timor Leste’s Country Manager, Elisabeth de Araujo during her Anna Stewart training in 2010. The idea was seeded to set up a centre in Dili to provide much needed support for Timorese working women. WWCTL was officially established in 2011 with initial funding from the Australian Government’s Australian NGO Cooperation Program (ANCP) and has since thrived with ongoing financial support and solidarity from Union Aid Abroad – APHEDA members, supporters and trade unions.

In November 2018, WWCTL expanded its support for women workers across Timor Leste with the launch of a telephone hotline to provide advice to women on their workplace rights.

The Timor Leste Labour Code (2012) contains enforceable conditions of employment for working people in Timor Leste but the low socialisation of this legislation has meant that many workers – particularly women – have little knowledge of their workplace rights. Identifying this important gap for Timorese women workers, the WWCTL developed a plan to offer industrial advice to women via a telephone hotline.

The hotline preparation also included the creation of a pocket-guide which contains easy-to-understand explanations of 12 of the most important aspects of the Labour Code, as well as information on discrimination and harassment, and a primer on what unions are and why all workers should join. Prior to the official launch of the hotline, WWCTL staff undertook a wide distribution of the booklets (together with a specific booklet for domestic workers) both on the street and via other NGOs who work directly with women and young people in Dili and the districts.

The central purpose of developing both the pocket-guide and hotline is the low amount of industrial cases that are currently brought to formal mediation – especially among women. Through distributing an easy guide to workplace rights and offering a hotline to guide workers through complaints processes, the WWCTL hopes to increase women’s access to workplace justice.

The hotline launch on 15 November 2018 was attended by over 100 people including representatives from the Ministry of Labour (SEPOFE), UN Women, the General Workers Union of Timor Leste (SJT-TL) and many NGO’s.

Driving WWCTL’s Advocacy into the future

This February WWCTL is sadly saying farewell to a much-loved staff member, Bree Ahrens, an Australian volunteer (AVI) who has worked as an Advocacy and Communications Mentor (Gender and Labour Rights) since 2017. Bree’s skills and dedication have assisted WWCTL to greatly strengthen its communications and campaigning capacity, including activist development and broad community engagement. Bree also played a key role in the redesign of the final approved draft Domestic Workers’ Bill to lock in significant industrial rights in the final draft. Bree will be greatly missed but her contribution to WWCTL will be lasting.

Heading into 2019, WWCTL will continue to provide advocacy, education, organising and support to Timor Leste’s domestic workers to ensure decent work and access to the legal protections they deserve. 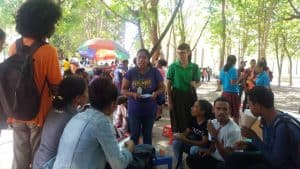