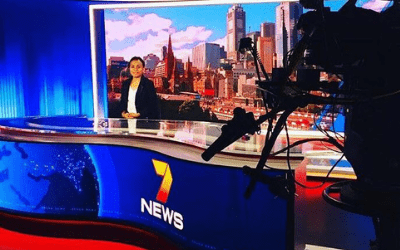 In September 2018, Balibo Five – Roger East Fellowship recipient, Pricilia Fonseca travelled to Melbourne and Sydney to undertake a 5-day internship at the Channel 7 Newsrooms in Melbourne. Pricilia also had the opportunity to meet with staff, members and supporters from the Media Entertainment and Arts Alliance (MEAA) and Union Aid Abroad – APHEDA. Pricilia works as a journalist for Radio-Televisão Timor Leste (RTTL) as both a parliamentary reporter and news presenter. Pricilia successfully applied for the fellowship in 2017 along with Augustos Sarmentos who works for Timor Post.

The Balibo Five – Roger East Fellowship was established to commemorate the anniversary of the murders of six Australian journalists in Timor Leste in 1975 during the invasion of Timor Leste by the Indonesian military. Pricilia’s placement was particularly poignant as three of the journalists who were killed were in Timor working for Channel 7. During her internship, Pricilia met with former colleagues and saw tributes to the journalists during her week with the news team.

On 17 September, Pricilia along with staff from APHEDA, MEAA and the Timorese Melbourne community leader, Carla Chung, visited the army base of Puckapunyal, 100kms north of Melbourne. This was a special trip for Pricilia as this is where she had been housed as a refugee at the age of 8 with her family in 1999. The Australian military offered safe haven to hundreds of Timorese refugees who were evacuated during the outbreak of violence surrounding the first Timor Leste vote for independence. Hosted by Major Peta Langbehn and Major Rebecca Polonski, Pricilia and the team were given a morning tea at the Puckapunkyal Community Centre followed by a tour of the buildings still remaining from her time at the camp. This was quite an emotional return trip for Pricilia who was enormously appreciative to have the opportunity to see the places she remembered fondly from such a tumultuous time in her childhood.

From Melbourne to Sydney

Before Pricilia left Melbourne, she spoke at a ‘Feminist Conversations’ event held at Victorian Trades Hall Council together with Filipino activist, Mae Paner. Each speaker spoke on issues of gender equality in their respective countries to a group of union and community members.

Arriving in Sydney to round off her time in Australia with the Balibo Five – Roger East Fellowship, Pricilia spent time with APHEDA and MEAA staff and leadership, including MEAA Media Federal President Marcus Strom. The same evening unionists from around Sydney joined her at a meet and greet event to discuss media diversity and the connections between Timor Leste and Australia. On her final day Pricilia met with the Timor Leste Consulate in Sydney Sergio dos Santos, which helped build stronger bonds between APHEDA and the Timorese community in the state.