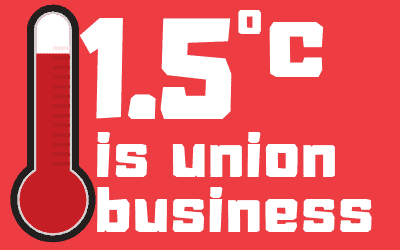 Here are five reasons why 1.5°C is trade union business!

All workers are affected by climate change. This is due to extreme weather – days of extreme heat, increased frequency of deadly storms, and bushfires – as well as increases in the cost of food and essential services, the spread of disease, increased political instability, conflict, war and forced migration. ​The IPCC Report of August 2021 shows we have no time to lose – it is situation critical! Read the IPCC Report.

2. The impact on workers is not even.

Low paid, vulnerable, informal and women workers across the Asia-Pacific region are impacted the most. Climate change makes their livelihoods more precarious, erodes human rights and causes inequality to skyrocket. Research has shown that women bear the brunt of extreme weather events where housing might be destroyed – families lose their income and children suffer complex diseases. Another example is informal labourers who lose available work hours due to consecutive days of extreme heat. These low paid, casualised outdoor workers end up taking home even less of their already meagre earnings. *Climate Change and Labour: Impacts of Heat in the Workplace, ILO April 2016

3. Limiting global warming to 1.5°C will make a tangible difference for workers.

Scientists have made it very clear that holding global warming to 1.5°C is…

4. Neoliberalism has fuelled the climate crisis.

Lack of action on global warming over the last 30 years has a strong correlation to the rise and imposition of neoliberalism. Instead of strong regulation and public goods approaches to eliminating carbon pollution and moving towards clean economies, action by governments around the world has been eroded through the ideological imposition of privatisation of energy systems, corporate influence on governments for profit, and solutions which promote further the market. The ongoing growth in global emissions and the state of the current climate crisis is testimony to the great failure of this approach.

5. Unions can combat dangerous global warming and build a safe, just and fair climate for all workers!

Unions are key leaders in the movement beyond the cruelty of neoliberalism. The climate crisis is a potent organising tool if we work effectively. Vibrant examples are emerging across the Asia-Pacific region, of unions building power through climate organising. This can be seen in India, Nepal, the Philippines, Indonesia, Vietnam, Australia, and New Zealand. Unions are harnessing the collective power of workers to change the rules and find fair and just solutions and systems. This addresses the urgent need for decarbonisation, along with demands for a just transition, decent work, union rights, connected communities and healthy environments. Workers have a safe climate to win and unions are the vehicle for this transformation!

Union Aid Abroad – APHEDA works with unions and allies across the Asia – Pacific region for climate justice, energy democracy and just transition. If you have ideas or would like further information on our program you can email our organiser Tom Reddington at treddington@apheda.org.au