Equality vs. Corporate Control: why we must defeat the RCEP 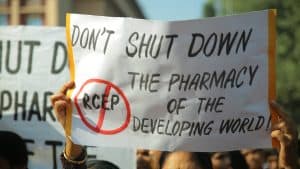 Five things you need to know about RCEP (image MSF)

The Regional Comprehensive Economic Partnership (RCEP) is the latest of the mega-trade deals to engulf our region. Compared to the Trans Pacific Partnership (TPP), it is bigger and shrouded in even more secrecy. There are 16 countries involved including the 10 ASEAN nations – Vietnam, Cambodia, Laos, Indonesia, Myanmar Philippines, Malaysia, Thailand, Singapore, Brunei – plus China, Japan, India, Korea, Australia and New Zealand. Together these countries represent half of the world’s population.

Negotiations began in 2012 and are now in full swing with several sessions this year and the next session coming up in India in July. Here are five important things you need to know about RCEP:

The RCEP will do nothing to improve workers’ rights in its member countries. For trade unions and people’s movements already organising against the RCEP across Asia, the outlook is grim. If the RCEP is not killed off like the TPP, the poorest countries will become further impoverished. In addition, any benchmarks that OECD countries currently provide will be dragged down, ensuring lower regional standards and deepening inequality.

In particular, RCEP will dangerously impact the lives of millions of people across Asia where some of the world’s poorest people live. Where the largest movement of people looking for work occurs every single day in migrant labour. Where some of the world’s most tyrannical leaders suppress trade unionists and environmental activists. And where the impact of climate change runs hardest and deepest.

In 2015 the International Monetary Fund (IMF) released research which linked trade unions to declining inequality. The economically conservative organization said that trade unions play this role in two ways – by lifting wages at the workplace through bargaining, and by influencing social policy (on wages, social security, health care policy etc.).

Yet the state of repression of trade unions in our region shows that governments across Asia place inequality second to controlling organised labour. In Myanmar, unions have only been legal since 2012 and ongoing legal restrictions make it near impossible for a union to develop power in a single industry. In Thailand, workers’ organising is very heavily restricted and unions are dissolved if membership falls below 25% of eligible membership.

The RCEP will deliver nothing to improve workers rights in its member countries. No improved trade union rights, nor rights for migrant workers to organise.

2. Food sustainability and the environment

The RCEP contains no discussion on environmental rights or standards – meaning governments across Asia will be signing up to this agreement with no environmental safeguards in place. Millions of people across Southeast Asia and South Asia rely on small scale subsistence agriculture for a meager living or as a means to survive.

To date, Free Trade Agreements (FTAs) have jeopardized the livelihoods of millions who depend on the land. FTAs fight for market access in low-income countries by demanding the removal of non-trade barriers such as governmental regulations on land ownership.

Further, low-income countries aim to achieve the removal of barriers to agricultural trade but in countries like Australia agricultural tariffs are now negligible. Rich countries protect their farmers through income support (e.g. cash during a drought or farming tax benefits) and non-price subsidies (e.g. fuel subsidies to maintain agricultural viability). Removing barriers to agricultural trade in low-income countries leads to import surges in times of glut and production from countries like Australia. This displaces local production, meaning that in times of scarcity there is not enough local supply and food prices skyrocket producing hunger, and food scarcity.

Organised farmers across Asia are also worried about the impact of the RCEP on the seed trade. Currently an international convention known as UPOV 91 obliges a seed patent to be protected for 20 to 25 years. Trade partners were pushing ASEAN members to ratify UPOV 91 in the RCEP forum which will eliminate the right of farmers to save their own seeds. UPOV 91 ratification would worsen corporate domination as five multinational companies currently dominate 90% of the world’s seed trade. In essence, RCEP is a means for corporations to push for even more aggressive laws and regulations that criminalise farmers for sowing, keeping, exchanging, and taking care of their seeds.

3. Impact on Asia and rising inequality

Inequality in Asia is rising and the RCEP will only exacerbate this. In the last two decades, 12 of 30 Asian developing economies, covering 82% of the region’s population, saw a worsening of inequality within their countries (World Bank). Research from the IMF shows that inequality impedes growth, causes crises, and weakens demand. Rising inequality also hampers poverty reduction. The Asian Development Bank (2012) says that “if inequality had remained stable in the Asian economies where it increased, the same growth in 1990–2010 would have taken about 240 million more people out of poverty—equivalent to 6.5% of developing Asia’s population in 2010 and 8.0% of those countries with rising inequality.” These statistics are shocking yet governments negotiating the RCEP see no risks to inequality in their secret trade deals. Export-oriented growth models can undermine ability to meet local needs, for example in agricultural societies, export-oriented growth has led to cash cropping and worked against sustainable self-reliant economies. This undermines both social and environmental sustainability. We need human-centred development and human-centred trade agreements!

In Australia, Medicare is Gold. Across many parts of Asia, healthcare to any decent standard is a far-off dream – especially in poor countries with governments entrenched in corruption or with highly militarized regimes that consume most government spending (e.g. Myanmar). The RCEP will raise the cost of medicines by extending monopoly rights for pharmaceutical companies and also delay access to generic medicines. This would result in less people being able to buy cheaper medicines and will also see governments spending less on medicine, as costs will increase. The RCEP will threaten access to medicines and the poor and most vulnerable will suffer the most.

5. The worst elements of the TPP agenda are being pursued in RCEP negotiations

Despite relentless efforts of people’s movements to topple the TPP, several elements of the worst of the TPP agenda are being ruthlessly pursued by our governments and stand out:

But what can we do to fight RCEP?

Organise. AFTINET is a network through which we can all organise resistance. AFTINET has comparable national networks across the RCEP countries to fight the RCEP. Union and people’s movements are organising and speaking out. Other organisations with information about the RCEPs impact in Asia include the Transnational Institute (TNI), Third World Network, Focus on the Global South.

Make no mistake. RCEP is the new TPP. Our globally organised movements contributed to building power to make the TPP a political liability. Ultimately Trump dumped the TPP but there’s no doubt he will be back negotiating newer versions to benefit the US at the expense of the Global South.

We need to distinguish movements by workers-of-the-world and those seeking environmental protection from narrow nationalist protectionism aimed against workers in poor countries. We need to argue for new fair trade agreements whose primary purpose is to entrench workers’ rights and environmental sustainability. A great example is the Hemispheric Alliance (from Canada through to Latin America) that emerged in response to the FTA of the Americas and the North American Free Trade Agreement (NAFTA).

We must, and we can defeat the RCEP, because our fight for an equal world depends on it. Because the health of an elderly person in Cambodia matters just as much as the health of our own child. Because our rights at work here are equally important to those of a Burmese man enslaved on a Thai fishing boat. And because there are organised networks of resistance across our region who want to work with us to defeat this.

“We can defeat the #RCEP – because our fight for an equal world depends on it!” Kate Lee at the @AFTINET trade justice dinner