5 things you need to know about climate justice 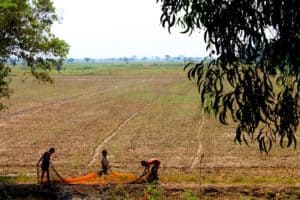 1. The poorer you are, the worse off you will be!

Dangerous global warming is a fundamental threat to health, rights, livelihoods, democracy and peace for workers and low-income communities.   It is women and children, in the poorest communities across our region, who are bearing the brunt of the climate crisis. The injustice of this is they have so little responsibility for the climate crisis, in terms of carbon pollution, however, are paying the price with their lives and livelihoods right now.

The Asia-Pacific region is home to 6 of the top 10 of countries on the Global Climate Risk Index.[i]  Working in communities like this, Union Aid Aboard – APHEDA, has undertaken a range of projects that have responded to the 1-degree of human-induced global warming.  These include increasing resilience in farming systems in the Pacific Islands, sustainable farming in Timor Leste, aquaculture and mangrove conservation, climate change awareness and renewable energy pilot programs in South East Asia. But more needs to happen to support an urgent energy transition in the limited five-year window left to limit global warming.

2. Work will get more dangerous in a hotter world

Rising heat stress is limiting productive work days available.  This erodes the livelihoods of the majority of workers who are in the agricultural, construction and manufacturing sectors.  In Cambodia, for example, at currently global warming levels, workers have lost 1.5 weeks each year.  At business-as-usual rates of pollution, this will increase to nearly 6 weeks per year by 2085.[1]

Climate deniers, conservative governments and the neoliberal paradigm have stifled meaningful action on climate change. The dominant neoliberal policy paradigm supports de-regulation, privatisation and free trade [i] [ii]  with a “business-as-usual” prediction having the planet on track for catastrophic 6°C temperature rise.[iii]  Even the agreed national targets of countries submitted under the COP 21 Paris Agreement have the planet on a warming trajectory of well above the 2°C “safe” limit. [iv]  The climate crisis needs an urgent public policy response to increased regulation, public service provision and market intervention by governments.

Sharan Burrow, General Sectary of the International Trade Union Confederation, said “There are no jobs on a dead planet” and “workers are on the frontline of climate change.” The International Trade Union Confederation (ITUC), along with union affiliates, worked hard to ensure a “just transition” clause was inserted in the Paris Agreement – the global framework that they have shown strong support for. “Workers in the fossil fuel industry deserve our respect, they deserve absolute recognition that they have brought us the prosperity of today and we want all of those workers to be part of a just transition.”

The Australian Council of Trade Unions (ACTU) has called for the establishment of a fully-funded federal “just transition” independent body.  This would ensure that workers and communities in the coal and other high carbon industries can transition to dignified and unionised employment in low-carbon industries.[i]

[i] For further information see: A Just Transition for coal-fired electricity sector workers and communities (Australian Council of Trade Unions, 2016)

‘Energy democracy’ provides an exciting opportunity to take action to slow down dangerous global warming and reimagine our society to benefit workers and low-income communities.  Unions and progressive movements are starting to work on ideas to make this a reality.