5 things (+1) you need to know about migration

1. A decision to leave is rarely made “freely”

A refugee is someone who has been forced to flee their country because of violence, war or persecution (UNHCR). Under International Law, a migrant is someone who freely makes a decision to leave their country for reasons of “personal convenience”. The problem with the law is that there are many reasons for migration that don’t fit with the notion of free movement or personal convenience.  For those who are unable to remain on their land because of climate change impacts such as rising sea levels or salination, toxic poisoning of soil or water ways that are not due to the local community, they are excluded from the definition of refugee.

There are many reasons why people migrate either within their own countries or across borders.  Migration has been happening for as long as people have existed. In modern terms, people migrate for a reason. For some, they have no job and no land that can support them so they move to a new area where they can survive. Poverty is a huge driver of migration for the vast majority of people.  They might have suffered continual crop failure, been the victim of land grabbing by more powerful people, corporations or their government, been displaced because of the impacts of climate change, trying to escape from domestic violence, or due to alcohol or drug addictions within their family, because of their sexuality, lack of local employment, political or racist tensions, environmental catastrophes, because they have been sent away from their family in order to send remittances home or because their Government promotes migration as the means of increasing their national income.

3. Poor countries of the world host the majority of migrants and refugees

Being a migrant is rarely a single journey process. A person who has been displaced from a poor or war-torn country often finds themselves in a transit country which cannot cope with the number of refugees. We are experiencing larger flows of migration than ever before due to the number of crises (OECD). 87% of refugees are hosted in low and middle-income countries which lack the resources and infrastructure to deal with the influx of population. Turkey, Pakistan and Lebanon host the largest number of refugees. A fraction of these people will make it to a high-income country like Australia as migrants. Highly skilled and educated people tend to be able to afford to migrate through formal channels whilst those with no or little education, the poorest, tend to struggle to find a path that provides them with security. 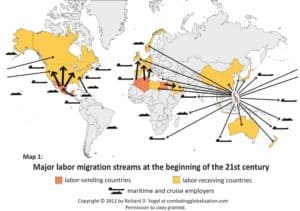 4. Women from poor countries are less likely to migrate

According to OECD figures, the gender breakdown of migrants is about half men and half women. There are stark differences though in the migration flows from certain countries and to receiving countries. In the Philippines the majority of migrants who seek work in other countries are women and they are an important source of foreign currency for their government. One factor that determines capacity to migrate is based on the availability of education. Women tend to emigrate more from high income countries rather than men. However, men tend to emigrate from developing countries to developed countries rather than women who tend to emigrate to other developing countries which have higher growth economies.  Largely the choice about which country is selected relates to the availability of work.  We see practical examples of this amongst those short term labour migrants who come to Australia as part of the Seasonal Workers Program from the Pacific.  The participation of women has been as low as 12% for the entire programme.

5. Inequality and racism are barriers for migrants

There is a clear difference in the treatment of migrants relating to their wealth, education and skill capacity. Those who have wealth, education and skills find it much easier to migrate as they are generally able to fill the skill gaps in other countries. However poor people find it a struggle to migrate and are more likely to remain poor. There are some occupations that have qualifications that are not recognised in the receiving country and for this reason while a migrant might be welcomed as a migrant they may not be able to pursue employment in the same field.  It is rather more the case that policy influences the selection of migrants and the employment market determines the type of job they will be able to obtain. Many receiving countries levy education costs on students and these are not affordable for the elders of a family unit as they need to work to be able to establish their family in a new country.

Racism is common around the world and it is a common struggle for migrants. The majority of migrants are of working age and the workplace globally is a place where discrimination and bullying is common and those who are most different are more likely to be the targets. This tends to encourage national groups to work together and be isolated and also in some cases to be treated unlawfully by others in the community. Most nations do not have comprehensive labour rights for all workers and so those who work in the informal economy are most likely to be exploited.

It is common for the perception of communities and policy makers to be skewed and to overestimate the size of the migrant population in their country. They also misunderstand the effects of migration generally and believe that the costs of migration are far higher than reality and discount the economic inputs and outcomes gained from migration. Another widespread misconception is the cost that is associated with migration, such as the fiscal and non-fiscal costs of leaving as well as leaving behind other family members.

+1. A win for migrant workers in Qatar!

In early November 2017, the Qatari Government announced its intention to pass legislation to protect migrant workers working on the building of the stadium for the FIFA World Cup. The International Trade Union Confederation (ITUC) had mounted a comprehensive campaign against the Qatari Government for the maltreatment of migrant workers including lodging complaints to the International Labour Organization (ILO). These complaints have now been dismissed pending the new laws.

Although the promised legislation has yet to be enacted, it is to end the “Kafala” system which tied workers to an employer, removed their freedom to change jobs and leave the country.  Greater freedom of movement, a minimum wage and a process for complaints will be provided under labour laws that will mean a huge improvement in the conditions of work.