A Health Clinic Emerges from Conflict on the Thai-Myanmar Border 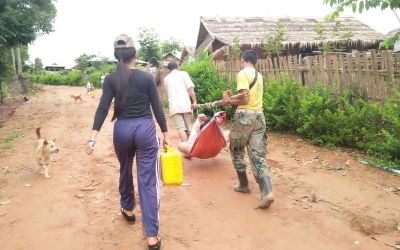 On the Thai-Myanmar border, a local medical clinic emerged from conflict to care for the villagers who were forced to flee their homes and seek safety in the Loi Kaw Wan refugee camp; this clinic was named the Shan Health Clinic

In  2001, a battle between the Burmese government’s troops and the Shan State Army resulted in the displacement of Akha and Lahu villages along the Thai-Myanmar border. After the battle, thousands of Shan villagers who had lived in the area were forced to abandon their homes. Over the course of a month around five hundred displaced people had gathered and settled at the border with Thailand near the Ban Thoed Thai, Chiang Rai province.

As conflict between the Burmese military and regional insurgents coninued to rage, the need for medical care to help the displaced communities grew.

After decades of fighting, the Loi Kaw Wan camp is now home to over three hundred households with over three thousand people, making it the second largest Shan refugee camp. People of different cultural backgrounds, such as the Shan, Lahu, Ahka, Palaung, and Wa people reside in the camp.

The Shan Health Clinic provides refugee families with twelve dedicated health professionals. Reaching out to remote villagers, the health clinic is also the base of operations for a team of backpack health workers who bring their skills and medicines to remote villages.

During the last year, over seven thousand patients were received care at the Shan Health Clinic. The health professionals treat a range of health problems from dangerous tropical diseases to common problems of infants and elderly patients. They assist women with pregnancy and birth, and they bring dental care to children.

The clinic has provided displaced people living in Loi Kaw Wan camp access to preventative health services and public health awareness. The clinic has helped communities to improve their knowledge of health prevention, has increased access to sanitation and has referred patients who require more specialised medical attention to Thai government hospitals.

In the past year, the number of patients has significantly increased. A major factor has been the rise in drug addiction across the Shan State. The team at the health clinic have been working hard with the community to help their sons and daughters overcome drug addiction. By caring for patients when they seek help, and by helping them avoid future dependency, the clinic is working to help young people achieve independence from drugs.

With the continued support of Union Aid Abroad members, together with the solidarity shown by the NSW Nurses and Midwives Association, the Shan Health Clinic will continue to help refugee families stay healthy into the future. Minor sicknesses and injuries will continue to be treated in the community clinic, while more complicated illnesses will be referred to regional hospitals.

By becoming a member of Union Aid Abroad – APHEDA, you can support the Shan Health Clinic and other health and education projects around the world.