A year in review: Asbestos – Not Here, Not Anywhere campaign

It is stating the obvious to say that 2021 was a challenging year. World Health Organisation data reveals the huge toll on health and life in our campaign target countries of Vietnam, Cambodia, Laos and Indonesia. From the start of the pandemic to the end of 2021 there has been a total of over seven million confirmed cases and nearly 190,000 deaths in these four countries. Governments enforced restrictions on movement to help contain the spread which impacted some of our campaign activities, but we adjusted the way we worked and despite the challenges, we had some significant wins and achieved progress along the path to a total ban. 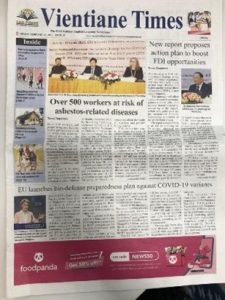 February 2021 was a big month in Laos. A National Workshop to review the National Action Plan to Eliminate Asbestos Disease took place in Laos in February 2021. All key ministries within the Lao Government, a key committee of the National Assembly, Australian government representatives, the Asbestos Disease Research Institute and APHEDA took part in the workshop which saw the Laos Health Minister call for the full phasing out of asbestos imports in Laos. It made big news in Laos, hitting the front page of the Vientiane Times.

In Indonesia, the OSH Victim Forum, a group of over 200 workers who have been injured at work by incidents or disease, assisted trade unions to respond to occupational safety and health and on the issue of asbestos while advocating on behalf of members regarding COVID-19. This work boosted support to trade union hotlines for workers to report incidents and violations during the pandemic. It provided information and education on COVID-19 to union leaders and delegates and assisted the development of a good practice workplace protocol for COVID-19 that unions can use in enterprise bargaining.

In June, after many years of campaigning, the global ban asbestos campaign chalked up a significant win. The Asia Infrastructure Investment Bank (AIIB) amended its Environmental and Social Framework to exclude asbestos containing materials from AIIB-financed projects.

The campaign to eliminate asbestos related diseases by global and national trade unions asbestos ban groups and victims has been targeting multilateral banks for many years including the Asian Development Bank (ADB) and AIIB as well as the World Bank Group. The campaign has called on them to take action to prohibit the use of chrysotile asbestos containing products and thereby eliminate the exposure risk caused by bonded asbestos products to workers and consumers as these products age, decay or are disturbed. Up until now, asbestos fibre has been banned. However, materials containing less than 20% asbestos fibre were allowed by the AIIB. This meant nearly all building materials containing asbestos were still able to be used. Asbestos cement sheeting is the most common asbestos product in Asia, and in countries like Vietnam it makes up 90% of all asbestos products. This win is a big hit to the asbestos industry in the region. The Asbestos Not Here, Not Anywhere campaign is seeking urgent updates from the Asian Development Bank (ADB) who is also currently reviewing its own Safeguards Policy.

In Cambodia, a new agreement between the International Labour Organization (ILO) and the Ministry of Labour and Vocational Training (MOLVT) initiated an update of the National Asbestos Profile and work commence on actions to prevent future asbestos related diseases discussed among key Ministries, trade unions and employers. This agreement is part of an existing OSH project in the construction sector supported by the ILO with APHEDA’s participation and support.

At the same time the Building and Wood Workers Trade Union Federation of Cambodia (BWTUC) strengthened its campaign targeting construction workers at high risk of asbestos exposure. This was done through the development of the first Khmer language asbestos hazard awareness video that was used during information sessions for construction workers. New flyers for construction workers to take home and distribute within their family and community to encourage use of alternative safer materials were also developed. These flyers provide advice to those who currently have asbestos in their homes.

“New flyers for construction workers to take home and distribute within their family and community to encourage use of alternative safer materials were also developed.”

In September, members of Cambodian National Asbestos Profile Working Group (CNAPWG) – a collaboration led by the Ministry of Labour and Vocational Training between 11 Ministries, employer groups and trade unions as well as international organisations such as ILO and Union Aid Abroad – APHEDA – jointly pledged to step up the fight to raise awareness of the health risks posed by these materials to both workers and consumers and to take action to eliminate asbestos related diseases over time in Cambodia. During that month, EuroCham Cambodia (comprising of over 330 businesses from 11 European countries operating in Cambodia) also pledged its support to ban the use of deadly asbestos across the country. The move comes as global pressure to curtail its use in the construction industry stepped up a gear.

In Vietnam, while the pro-asbestos lobby has continued its campaign to deny the evidence, misinform the public, and delay any regulation that will upset its deadly trade, we are very encouraged by a 50% drop in asbestos fibre imports in the last two years, partly due to our awareness program and partly to growing supply of alternative products. This information is not from us – but comes from the asbestos industry in Vietnam.

On September 28-30, ban asbestos and victim networks from across the Asia Pacific region came together online for the Asia Ban Asbestos Network’s (ABAN) three-day conference. Alongside representatives from global health and safety organisations and trade unions, delegates from 21 countries including India, Indonesia, Japan, Korea, Vietnam, Laos, Australia, Cambodia, Fiji, and Bangladesh shared insights and information on the growing global effort to eradicate asbestos-related diseases that, according to the ILO, are responsible for over 230,000 deaths each year globally. They stressed that the longer countries delay bans, the higher the cost to human life,  the economy, and the environment.

In November, the third Clean Pacific Roundtable conference brought together people from 15 countries in the Pacific to discuss environmental, health, and hazardous waste issues in the region. Participants have already agreed to move towards an asbestos ban and are now grappling with how to protect the population from exposure and where to dispose of the thousands of tonnes of asbestos waste when there is no available land to bury it.

At the end of the year, in Vietnam a new partner organisation joined in the campaign to raise awareness of the health hazards of asbestos for ethnic minorities and to advocate for the elimination of asbestos-related diseases. The Association to Support Mountain Economic Development (VAMEDA) and the Research Center for Human Rights in Ethnic and Mountainous Areas signed a cooperation agreement on the project. The groups agreed to raise awareness of the health and environmental hazards of asbestos among ethnic minorities and reduce the use of asbestos-fibre roofing sheets. They will also strengthen cooperation with the community to advocate for the conversion of using asbestos-free roofing sheets, moving towards not using asbestos fibres in roofing production in Vietnam, and safely managing the remaining asbestos fibres.

We are very encouraged by the progress made in 2021 under difficult circumstances. We can see that the asbestos industry is in decline, but thousands of tonnes of asbestos-containing materials still pour into these countries. A total ban is needed, but with an active asbestos industry lobbying hard to delay any moves by governments to ban this deadly substance, the fight will continue.