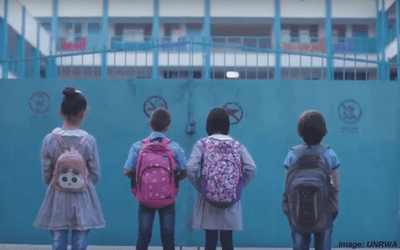 In order to push Palestinians to accept Trump’s “deal of the century” the USA administration this week announced big cuts in aid to Palestine and to Palestinian refugees. This will have massive impact, particularly on Gaza, where 2 million people, half of whom are children, are experiencing a humanitarian crisis after more than a decade of blockade by Israel and Egypt. The USA is now saying that 90% of the Palestinians registered as refugees should be reclassified, though they have no avenue of returning to their homeland as guaranteed by UN resolutions.

US funding cuts to UNRWA (UN Relief and Works Agency for Palestinians) threatened the start of the new school year on September 1 for Palestinian refugee children. This has been averted with UNRWA declaring schools will re-open tomorrow for 526,000 children with the support of donor countries who want education to continue. Funding for teacher’s wages and facilities remain under threat.

Impacts on the Australian aid program to Palestine

In July, the Australian government announced it would end support to the Palestinian Authority via the World Bank and re-route funds via other international humanitarian mechanisms. Also at the end of June, after allegations in the Sydney Daily Telegraph, the government suspended Union Aid Abroad- APHEDA’s successful agriculture project in the West Bank and Gaza. The allegation is around a man who was killed in protests in Gaza on 14 May, who had been a temporary community worker for our long term local partner, the MA’AN Development Center, but not employed on any Australian-funded projects. After he was killed, Israeli organisations looked at his social media and asserted he had been a member of the left political party, the Popular Front for the Liberation of Palestine, which is on the Australian Consolidated List of terrorist entities. Union Aid Abroad – APHEDA screens all local employees working on our projects. The Telegraph used these allegations to attack unions and ALP politicians: Ged Kearney, Bob Carr, Claire Moore and Gareth Evans.  Union Aid Abroad – APHEDA and our partner organisations in Palestine are cooperating in an audit of this project by DFAT.

Internationally, organisations aiding Palestinians are under attack, often using allegations of indirect linkage with particular campaigns or political groups. The attacks also constrain democratic civil society inside Israel and Palestine. Cuts to aid are being used to force Palestinians to surrender rights inside Israel and in Jerusalem, to renounce the Right of Return by the refugees, to accept a high-security impoverished sealed off micro-state in Gaza, and to accept annexation by Israel of most of the West Bank.

It is important that Australia supports humanitarian relief and development for Palestinians, and seeks a solution that recognises Palestinians rights to self-determination and sovereignty.