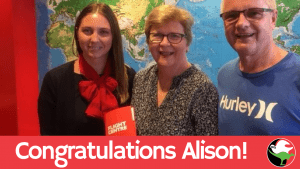 Alison and her husband have been union members all of their lives. Alison has also been a supporter of Union Aid Abroad APHEDA since 1998 and has been selling (and buying) tickets ever since. When Alison received her raffle tickets in the mail this year, she decided not to sell them to her friends and former colleagues, but to buy them for herself (good move, Alison!). Not once did Alison think she would be the winner of the 2017 APHEDA Raffle first prize – an $8,000 travel voucher!

I have been very excited since I received the news that I had won the 2017 APHEDA Raffle. Every now and then I stop and think, ‘Is this for real?’  It’s a great feeling when I tell friends or family that I’ve won 1st prize in a raffle – everyone is so happy for me and very interested in who, what and how.

I joined the Municipal Employees Union (which became the ASU) in 1974 when I first started work as a Library Assistant at Rockdale Council, and continued as a member until my retirement from Sutherland Council in 2014.  I’ve always been a supporter of unions in general because of what they have achieved in the past for workers, and the support they continue to give to working people at home, in our region and around the world.  Sometimes it’s easy to forget that so much of what we take for granted today was fought for in the past and the APHEDA newsletters I read remind me of what is still being tackled at home and abroad.

I first became aware of APHEDA when I bought Christmas cards in 1998. I continued to buy them up until 2009, when I stopped sending cards. I have sold raffle tickets at work each year from 1998 until 2014 when I retired.  I have always considered buying a raffle ticket for a worthy cause a ‘donation’ and never for one minute expected to win anything. I always just put the book of tickets together with the information about the work done by APHEDA on the table in the lunchroom at work and my colleagues would buy some tickets and I would buy the remaining ones. I never had to ‘push’ them as most people saw their value and were keen to donate.

When I received the book of tickets in the mail this year, I decided not to sell them to my ex-work colleagues but to buy the whole book myself – which turned out to be an excellent idea!

My husband and I had already planned, booked and paid for a river cruise through Portugal in April next year with another couple. The Flight Centre voucher will mean that after we finish the river cruise we will be able to do something extra special. We’re thinking of going to the south of France and maybe even staying in a really upmarket hotel in Paris before we come home, I might even shout the friends we’re travelling with. It will be such fun to plan an add-on to our trip. I am already feeling quite spoiled because eight thousand dollars is a LOT of money!

The 2017 Union Aid Abroad APHEDA Raffle raised $80,000 for APHEDA’s work overseas. We thank everyone who supported the raffle – both buyers and sellers – and we congratulate Alison on winning this year’s raffle.

Full results of the 2017 APHEDA Raffle