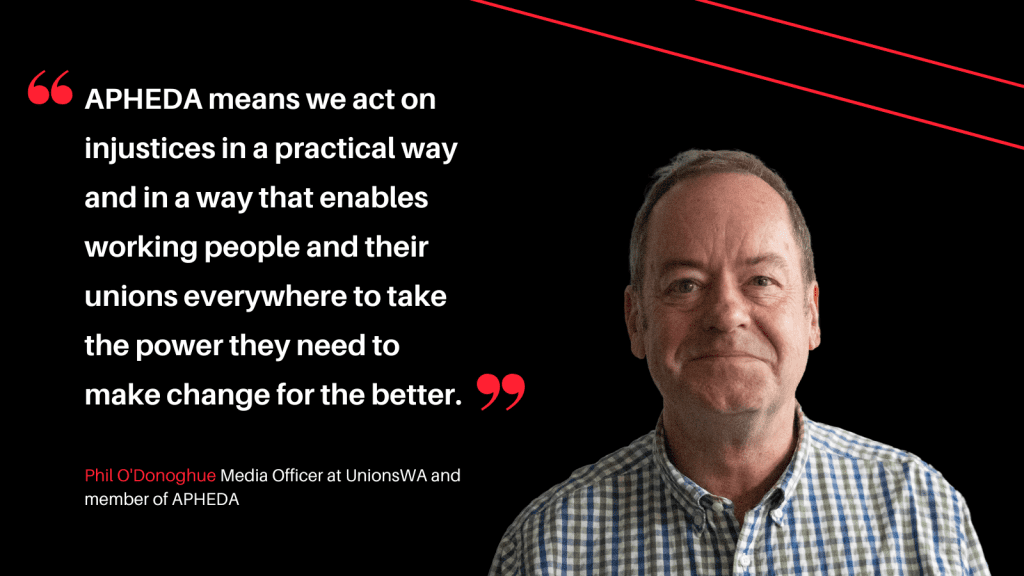 Phil O’Donoghue is the Media Officer at UnionsWA and has been an APHEDA member for six years. In this interview, he tells us why building internationalism is important.

Union has had different meanings for me over time. Born into a union family, at first I took it for granted. When a co-worker was unfairly dismissed, unionism felt like insurance.

Now, unionism for me is more about values – of equality, health, safety and wellbeing as well as togetherness, literally “union”.

The global struggles of working people and their communities, particularly in our region, are at another level of inequality, danger, and conflict, often caused by greed and environmental harm.

APHEDA means we act on those injustices in a practical way and in a way that enables working people and their unions everywhere to take the power they need to make change for the better.

What part of APHEDA’s work are you most connected to or proud of?

UnionsWA and The Southern Initiative for Global Trade Union Rights (SIGTUR) have made a commitment to raise funds over the next three years to support the APHEDA partner organisation Local Initiative for OSH Network (LION) Indonesia, which is working to help sufferers of asbestos-related disease and to bring about an asbestos ban in Indonesia.

WA has such a long and sad history of mining asbestos but also a proud record of fighting for its ban. Sandgropers (aka West Australians) are more likely to holiday in Bali than in Brisbane.

A recent APHEDA-sponsored visit by a LION Indonesia delegation allowed WA activists to meet key Indonesians in this important fight, as well as support their visits to the Asbestos Diseases Society of Australia and related health and research agencies in WA.

I used to think the diplomatic phrase about the importance of “people-to-people relationships” was glib, but what I saw during these meetings was how genuinely moved Indonesians were by our concern for their health and wellbeing.

So many problems – inequality, conflict, environmental harm – are global in nature, in many cases, global in their causes, and needed solutions, including the need to address the harm caused by large multinational corporations. If we only work at the level of our own local communities or our own nation-state, we’ll fail, and we can’t afford to fail.