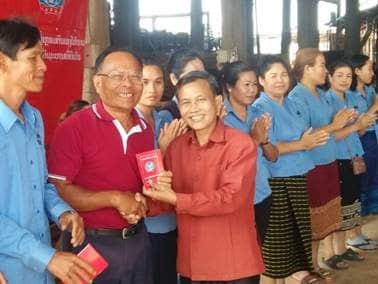 In 2016-2017, the Lao Federation of Trade Unions (LFTU) and Union Aid Abroad-APHEDA jointly designed an innovative one-year pilot project aiming to test approaches to organising workers in the rapidly emerging private sector in Laos. At the same time, recognising Laos as the biggest per capita user of asbestos at that time, the two organisations began working hard to protect Lao workers, their families, and the community from asbestos related diseases.

The success demonstrated by their pilot phases saw both projects go on to full implementation and achieving significant wins for Lao workers in both areas. The Lao government has announced the importance of eliminating asbestos-related diseases and will begin the development of a roadmap that we hope will see this goal become a reality by 2025. Although there is still a long way to go, LFTU organisers have for the first time been able to enter and organise 132 private businesses with 3,134 private sector workers joining the union for the first time during 2017-2021.

On 5 April 2022, in recognition of the commitment, hard work and successful collaboration, between the two organisations, Madam Aliyavanh Ackavong, the Vice President of the LFTU awarded Union Aid Abroad – APHEDA their highest honour, the Lao Federation of Trade Unions Medal.