On 27 April, the anniversary of the first democratic elections in South Africa in 1994, Bob Hawke officially opened an exhibition on the history of the Australian anti-Apartheid movement at the Museum of Australian Democracy in old Parliament House in Canberra.

The exhibition – called Memories of the Struggle – was driven by Angus Leendertz, a South African Australian activist, and gives prominence to the role of trade unions and APHEDA in making significant contributions, both to the boycott campaign from the late 1950s, and to practical solidarity projects worth millions of dollars for the liberation movements in exile, and then after 1990, for project assisting the democratic transition in the country.

The role of non-racial trade unions as the driving force of the revolutionary struggle inside South Africa is also highlighted.

Want to learn more about the crucial role Australian unions have played in supporting union and freedom struggles and the fight against inequality, poverty and international social justice? Get your copy of our book Livelihoods and Liberation Struggles: 30 years of Australian worker solidarity – Order online 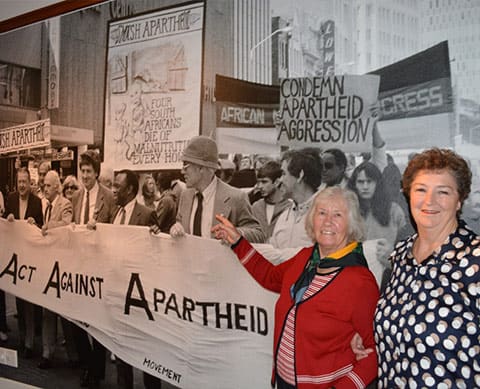 Helen McCue and Audrey McDonald at the opening of Memories of the Struggle.