Compounding the crises, Bloomberg news service revealed that more than 50 years ago, Johnson & Johnson funded experiments on nearly a dozen prisoners incarcerated in Philadelphia, USA. These experiments included injecting prisoners who had volunteered for a payment with potentially cancer-causing asbestos to examine the effect on their skin compared to that of talc which is used in their well-known baby powder.

Now Johnson & Johnson, which has global sales of nearly $USD100 billion, faces about 38,000 lawsuits brought by women in the US diagnosed with ovarian cancer, mesothelioma and other injuries, which they allege were caused by exposure to the powder. According to US law firm Saiontz & Kirk, defending against the talcum powder litigation has already cost Johnson & Johnson $1 billion, on top of settlements and verdicts that have amounted to another $3.5 billion. In response, Johnson & Johnson announced that it was spinning off any liability exposure it faces from the litigation into a new company, LTL Management, LLC, which was formed with only $2 billion in assets and then promptly placed into bankruptcy, potentially leaving thousands without compensation. 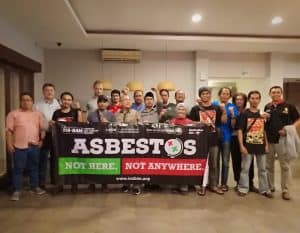 Campaigning against asbestos use in Indonesia.

Johnson & Johnson has voluntarily withdrawn talc-based baby powder from sale in Canada and the United States in 2020, but continues to market it around the world. In Indonesia, for example, Johnson & Johnson’s baby powder products still appear in the shelves of general stores. APHEDA’s partner organisation Local Initiative for Occupational Safety and Health Network (LION) is working to achieve a ban of asbestos in Indonesia. It is currently undertaking testing of Johnson & Johnson baby powder products and is applying for registration as a consumer protection agency. By collecting evidence and advocating for millions of consumers exposed to potentially carcinogenic substances, LION continues to lead the charge to rid Indonesia of lethal asbestos and to protect future generations from preventable diseases.

Meanwhile, the US Securities and Exchange Commission approved a request from Tulipshare, an activist investor platform, to table a resolution at the company’s April 2022 Annual General Meeting: The resolution states: “Shareholders of Johnson & Johnson (“JNJ”), in recognition of the social justice and public health issues raised by multiple organizations and agencies, recommend that JNJ discontinue global sales of its talc-based baby powder.”