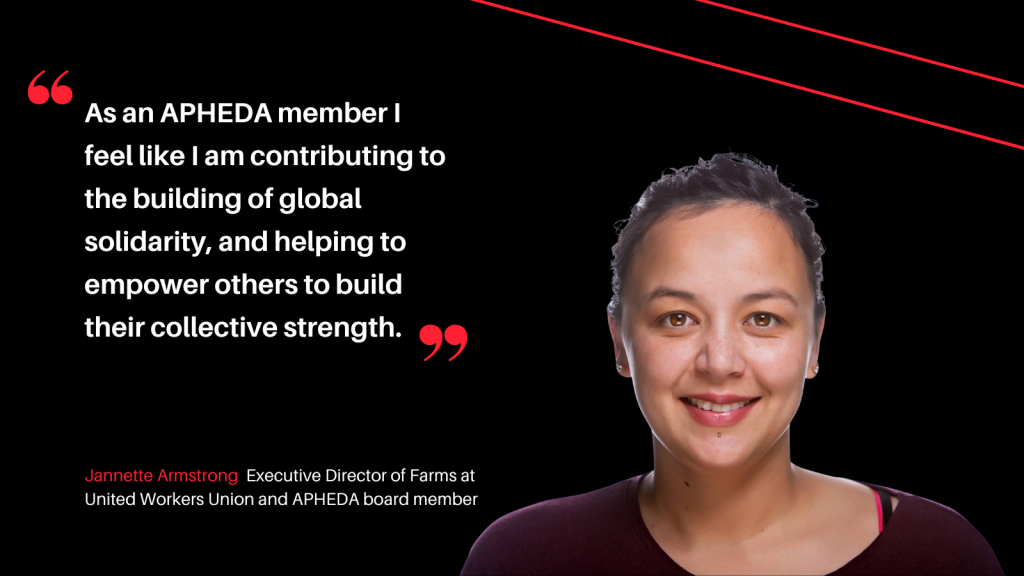 Jannette Armstrong has been a union organiser and official now for over 13 years. Formerly Secretary of the United Voice Tasmania Branch, Jannette is currently the Executive Director of Farms campaigning with the United Workers Union. She has been a member of Union Aid Abroad-APHEDA for nine years and is a member of the APHEDA board.

To me, being union means being part of something bigger, something greater than the sum of its parts. It means fairness, and equity, and standing up for what’s right. It means strength and safety in numbers, and it’s the most credible, tangible way to fight back against the negative forces of modern individualism, greed, and corporatisation. Plus, it brings a sense of belonging. Through the union movement, I have the greatest extended family of sisters and brothers, and my children are growing up in a village full of awesome role models.

Being APHEDA is really just an extension of being union, but on a global scale. It is also important for me to be able to contribute to a secular aid organisation. As an APHEDA member I feel like I am contributing to the building of global solidarity, and helping to empower others to build their collective strength.

What part of APHEDA’s work are you most connected to or proud of?

I have a special interest in the work APHEDA does with Pacifica unions and Timor Leste, as it converges with the work I do organising farm workers in Australia – many of whom come from the Pacific and Timor to help feed our country. APHEDA has helped our union develop relationships and partnership with Pacific unions and activists, which have been integral to our organising efforts here in Australia, as well as for the Pacific unions themselves – a great example of international solidarity in action. As a Thai-Australian, the work APHEDA does in the Thai-Myanmar border is also close to my heart.

As we say across the union movement: Touch one, touch all.

As we say across the union movement: Touch one, touch all. We live in an increasingly mobile and globalised world, our lives and work are not limited by national state borders. Building international solidarity is crucial to our union values, and to achieve the aims of the union movement in Australia. We can use our union power to help improve the conditions and lives of workers overseas, and they can use their collective power to influence and help us win here too.