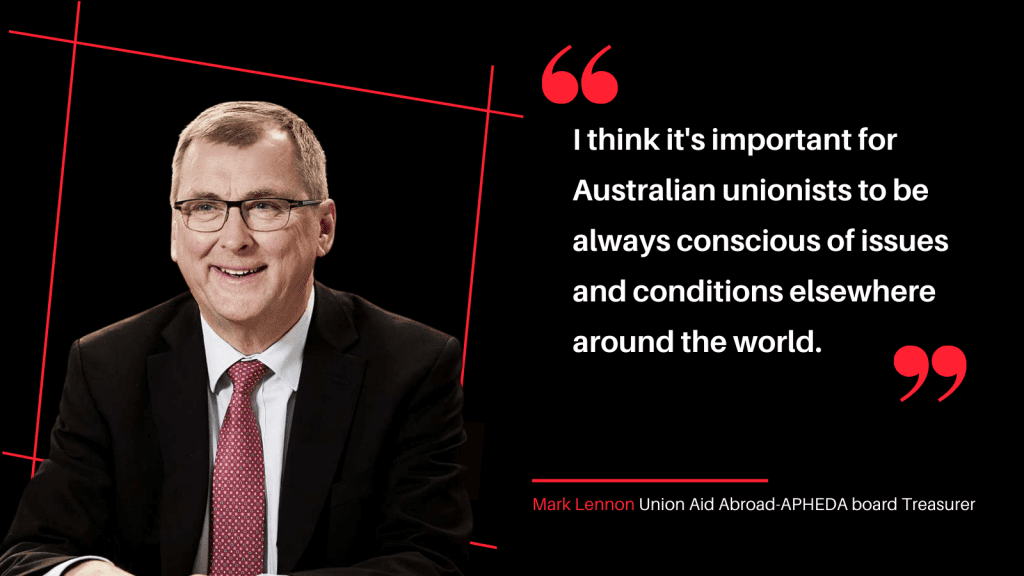 Mark Lennon has been a member of Union Aid Abroad-APHEDA for more than 17 years. He has volunteered as a member of APHEDA’s board since 2011 and currently holds the position of Treasurer. He was a leading figure in the NSW union movement for many years and was Secretary of Unions NSW between 2008 – 2015.

Well, it means that you understand that the way to enhance the living conditions of people is through the collective and through the power of the union movement. But it goes beyond that. It’s more than just economic solidarity, it’s about the sense of togetherness, that the only way that we can advance the human condition is by accepting the need to work together in that endeavour.

The idea that the work to enhance people’s quality of life stops at national borders is pretty ridiculous, something I’ve become more aware of that as I’ve got older. APHEDA is in my view one aspect of the work of the International Union movement at large. It’s the Australian trade union movement’s contribution to the greater collective good.

I think the strength of APHEDA is also the scope and diversity of his projects.  The four pillars under which we operate [defending workers’ rights and safety at work, climate justice and a just transition, defending the rights of migrant workers and refugees, women’s solidarity across borders] shows the objectives we’re trying to achieve are multifaceted. And the way we achieve that is to ensure that there’s diversity in the projects we’re undertaking.

All our projects are important but the one that springs to mind is the work that we’re doing in East Timor. It’s close to Australia as part of our region and APHEDA has been supporting projects there even prior to their independence.  The Working Women’s Centre in Timor Leste is a great example of the international work that APEHDA performs.

Why do you think building this internationalism is so important amongst union members in Australia?

Firstly, there’s the moral imperative. We have an obligation to assist working people where ever they may be but not through charity but through working in solidarity with them.  Secondly, it’s important for Australian unions to always conscious of workplace issues elsewhere around the world.  Enhancing the rights of any group of working people and therefore their economic well-being can only benefit working people all around the world including in Australia.