Audrey McDonald has supported Union Aid Abroad APHEDA since its establishment in 1984. Audrey continues to be actively involved in APHEDA’s work and is passionate about internationalism and global solidarity.

Being union is to struggle for worker’s rights, social justice, women’s rights, as well as issues like peace and disarmament. Being union – particularly for workers – means not only fighting for improved wages and conditions but also fighting for entitlements like Medicare.

For me, being APHEDA means protecting and improving the rights of people struggling in many countries around the world. Being APHEDA means giving them support – giving them access to education, training, improving their living standards, and enabling them to be self-sufficient. APHEDA understands and does what it can to improve the rights of people in other countries who don’t have the conditions that we have. There is so much to tell you about what APHEDA means… it means so much to people in these countries and in the struggle.

[Note: Audrey gives further background into her journey with APHEDA which we have published as ‘Background Information’ at the bottom of this interview]

If we are going to play a greater role in support of people in developing countries, then we have to get more people to understand the role of Union Aid Abroad APHEDA and what it does. We need to more people to come on board to support the struggle. We should be doing whatever we can do to publicise, share and join people up. Developing publications like the history of APHEDA book, ‘Livelihoods and Liberation Struggles’ helps and the more we can do that the better.

We need more people getting involved in international solidarity to get behind people overseas who don‘t have the same rights and conditions as we do. And APHEDA offers a great opportunity to get involved. We love APHEDA and we love the work that we do because it means so much to people in other countries.

What part of APHEDA’s work do you feel most connected to/proud of? Why?

An ongoing piece of work I feel connected to is the struggle in Timor Leste. Years ago I was involved in a meeting with women from Timor Leste and Emilia Batista, Xanana Guzmao’s first wife, was also in the meeting. Emilia came to Trades Hall and talked to us about the situation in Timor Leste and the struggle for independence. Timor Leste have also had an ongoing struggle around gas in the Timor Sea. I am not sure where that is going to finish up but I suspect that the Timorse won’t benefit out of it. It’s a struggle against corporate greed and denial of the rights of people. This is one particular area that we [Australia] have gone and tried to muscle in on to take advantage of the wealth generated from the gas in the Timor Sea. APHEDA continues its work in Timor Leste with the Working Womens Centre of Timor Leste (WWCTL) and also helping farmers and agricultural workers to organise.

What do you see as the issues of greatest concern to focus on into the future?

We have to understand the link between what we are doing to improve the life and conditions of people in these countries as well the danger posed by climate change and the risks posed by use of nuclear weapons. If there is conflict, and nuclear weapons are used, the future of the world as we know it is at stake. We are fighting for rights for people in other countries but if we don’t do more about peace and disarmament and the environment, we won’t have a world.

I tell them why it’s important to join and how APHEDA protects and improves the rights of people struggling in many countries around the world. Do they join? Yes. (who wouldn’t join if Audrey was the one asking you to!) 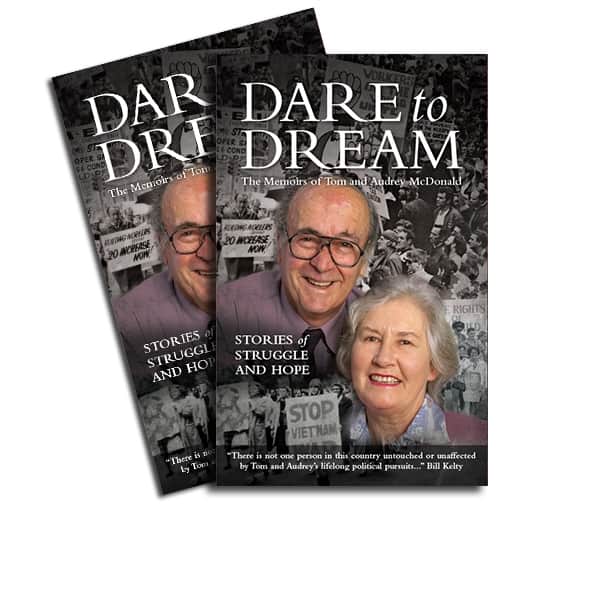 It started when I moved to Sydney from the bush to attend high school. I lived in a town called Sandy Flat, just south of Tenterfield. We didn’t have transport to go to the nearest town to go to high school so barely anyone went on to high school. My mother and I both came and we worked at the school boarding house – she worked as a housemaid and I worked as a cashier and a waitress and picked up additional work at the milk bar and as a receptionist.

It was during this time that I got my grounding in the union and progressive movements. I joined the Hotel, Club and Restaurant Union when I was 14 as the Union had 100% membership in the boarding house. My love for the union movement and organisations like Union Aid Abroad APHEDA (which was focused on international movements) was a natural process and progression.

I became National Secretary of the Union of Australian Women – a national organisation concerned with working women’s issues and international issues – which was affiliated to the Women’s International Democratic Federation. Through this work, it went without saying that when APHEDA was established in 1984, I supported right from the start. In fact, after APHEDA was established and when Helen McCue was the Coordinator, the office moved into the room next to us on Level 3 of Trades Hall. I am proud to say that I have been connected since the beginning and I gave APHEDA their first ever kettle!

My very first introduction to the international movement was representing the union at 17 at the 1955 Congress of the Food and Canning Workers organisations in Sofia, Bulgaria. I met and was strongly influenced by Elizabeth Mafikeng, the President of the African Food and Canning Workers’ Union. I was deeply moved by her story of how she travelled from South Africa to that conference in Bulgaria. Not able to leave the country, Elizabeth travelled by boat to London as a “nanny” for a white family and found her way across to Bulgaria from there. A few years later, the apartheid regime in South Africa issued an order to banish Elizabeth to the homelands. Through getting to know Elizabeth, I got to know the struggle against apartheid and we had a good connection with South Africa. And it was this solidarity with South Africa that paved the way for my ongoing passion for international solidarity.

As a movement, we were concerned with the issue of apartheid in South Africa. Therefore, the Union of Australian Women had a natural affiliation with APHEDA – we supported APHEDA and worked on various campaigns, an early one which ultimately led to Nelson Mandela coming to Australia after he was released from prison. We worked very closely with the ANC support committee established by Eddie Funde in the early 1980’s.

The work of APHEDA and the work of the Union of Australian Women was very much intertwined. For me personally, when you become aware of the conditions of women in places like Africa, Latin America, and Indochina, you can’t but be concerned about their rights and the rights of people around the globe. 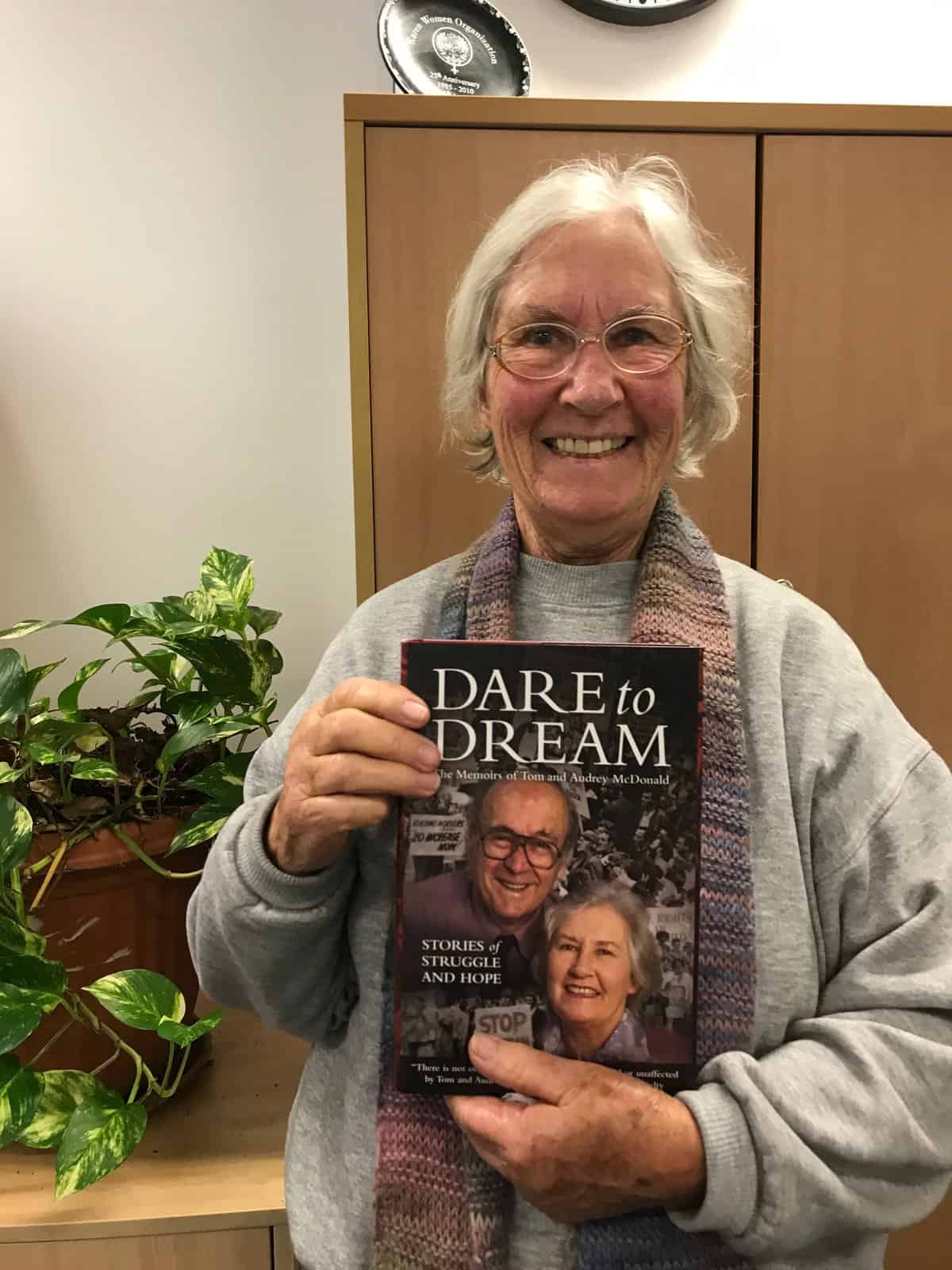