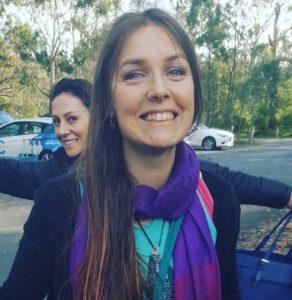 This month we spoke with Bree Taylor, a Lead Organiser with NUW. Bree is a passionate Union Aid Abroad-APHEDA supporter and shared her thoughts on why it’s important to support our work and to act in solidarity with workers in other countries.

I love being part of a collective and I feel that is true of most people. I know the government is trying to take away some of our rights and I believe we need to fight together not as individuals to stop that. It’s something I have always cared about because I come from a family with really good values who believe in looking after everyone not just themselves.

Union Aid Abroad is an extension of my union values. We need to look after other workers in other countries because we need to make sure they have support to fight for their own rights through their unions.

I get most moved about the work in relation to the support of the Rohingya community; it is a heart breaking situation. The rally in late 2017 felt so important to allowing people from Burma to speak out against injustice. Union Aid Abroad is really good at working on current issues and I find they are always spot on in how they operate.

Despite the decades of work, there are still big problems on equality for women around the world. I’d like to see more work in the most vulnerable groups like sex workers, gender violence and especially pay inequity.

I tell them that Union Aid Abroad works to support workers like themselves who live in other countries. We have to develop solidarity and so I give them examples like the work that women who are sex workers in Cambodia do and the difference that Union Aid Abroad has made in working to strengthen their union. If we talk about relevant examples of social justice and trade union rights, most people react positively.