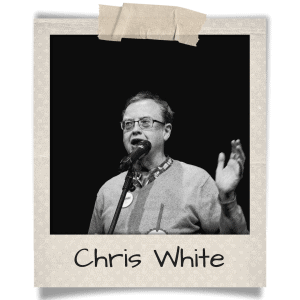 Graduating from Law, Politics and History during the 1968 revolutionary era, Chris was involved in the Anti-Vietnam War and anti-US imperialism protests, and supported many liberation struggles. In 1974, Chris began his work in the union movement with the AWU SA Branch before moving on to the Miscellaneous Workers Union SA (now United Voice). In 1985, he was elected Assistant Secretary of the United Trades and Labour Council of South Australia (UTLC) (now SA Unions), and then was elected Secretary until 2002. Chris was also a member of the ACTU Executive during this time. Later in Canberra, Chris worked for ASMOF ACT and NTEU ACT. Chris became involved in Union Aid Abroad – APHEDA in 1985 and has been a strong advocate and activist ever since. Last year, Chris’ involvement in APHEDA was recognised when he accepted the APHEDA Solidarity Award at the 2018 AGM.

How did you become involved in Union Aid Abroad – APHEDA?

In 1985, Tas Bull from the Seaman’s Union, asked if I could assist setting up APHEDA in Adelaide. He explained that APHEDA planned to support Palestinian work with health projects, enduring skill development and capacity building for reconstruction. To this day, APHEDA’s Middle East projects are still exemplary, despite genocidal policies continuing by the state of Israel.

At the United Trades and Labor Council (UTLC) of South Australia we encouraged union support and financing of APHEDA. We improved our work with APHEDA by delegating initiatives to the unions. At that time, a young unionist asked me whether she and her group could organise APHEDA functions adding that she hoped to one-day work for APHEDA. “Keep going and you may, I say”. Deb Nicholls has now worked for APHEDA in Vietnam and has been actively involved as an activist since the mid ‘80s. I mention this to encourage others to become active in the Australian union movement’s global justice organisation. Each year, the APHEDA Activist Group in South Australia holds the Terri Daktyl Memorial Dinner to raise funds for projects in Vietnam (which were started through funding from South Australia), as well as fund the Working Women’s Centre Timor Leste and their domestic workers program.

After thirty years of involvement in APHEDA, which part of APHEDA’s work is most memorable to you?

As an Adelaide East Timor solidarity activist from the 1970’s, Timor Leste is my favourite APHEDA program. APHEDA supported Australian union protests, bans and strikes against Indonesia whose TNI militia inflicted horrific violence after the massive ‘YES’ vote for Independence.

In 2011, I participated in the APHEDA Timor Leste Study tour with Elisabeth de Arujo and others and I have many fond memories of this visit (read about the 2011 Study Tour to Timor Leste). I had the opportunity to talk with Zito da Costa, General Secretary of the KSTL (the Konfederasaun Sindikatu Timor-Leste, which is Timor’s ACTU), and Almerio Vila-Nova and I attended the SJT-TL 2012 General Workers Union 2nd Congress (Sindikatu Jeral Trabalhadores Timor Leste). In 2013, Ged Kearney asked me to represent the ACTU as a speaker at the 2013 KSTL AGM as a strong show of international solidarity.

When I was living in Darwin, Peter Jennings – then Executive Officer of APHEDA – visited me and we discussed Timor Leste worker struggles. I later delivered a paper on strikes at the University of Timor Leste. I also met Zito and Almerio again at the ACTU Congress and at the NT United Voice AGM. I was a an official Solidarity observer for the Timor Leste Presidential and Parliamentary Elections.

“I commend the Australian union movement and its humanitarian aid agency Union Aid Abroad APHEDA for your solidarity and support to our independence struggle and your on-going commitment to supporting us in developing health, education, reconstruction and human rights programs.”

Philip Hazelton, APHEDA’s Asbestos Campaigner in Vietnam, introduced me to the OHS, HIV work and the local staff working on that program. Having campaigned for over 40 years against asbestos and represented both asbestos pipe and sheet workers in Adelaide, APHEDA’s Asbestos. Not Here. Not Anywhere campaign work has really resonated with me. Philip also introduced me to Vietnam’s OHS authority to discuss asbestos.

Please support APHEDA’s Asbestos. Not Here. Not Anywhere. campaign and help stop asbestos use in South East Asia and also the union struggle for global justice against asbestos use globally.

Why do you think it’s important for APHEDA to grow its membership base? How do you ask people to join APHEDA (and do they say yes?)

In 2014, we moved to Melbourne to retire. I was invited along to a meeting to revive Melbourne’s APHEDA activist group. At first it was a bit slow – only a few people came to the film fundraising event, ‘Balibo’ and I did not have the contacts to organise a big APHEDA dinner. But we did manage to pull off an APHEDA Benefit for Gaza at Bella Union with the support of the Victorian Trades Hall. One of the best things to come out of this time in Melbourne is me saying that we needed a designated Melbourne organiser. Now, in 2019, we have two – Samantha Bond and Tom Reddington.

I also remember a Victorian Trades Hall youth unionists function where we encouraged young unionists to join APHEDA at the door. To my surprise, most were not yet members of APHEDA.

There is much work to do to build APHEDA’s membership and bring in young unionists to the global solidarity family (not yet a member? Join today! )

It is important for young unionists to learn about the work of APHEDA. Please promote APHEDA’s history to young unionists. See my review of APHEDA’s 30-year history book, Livelihoods and Liberation Struggles.

Become a Global Justice Partner today and contribute to Union Aid Abroad – APHEDA’s work around the globe. Yes, sign me up!

Chris’ long involvement with APHEDA shows there are many ways to get involved – from participating in a Study Tour to organising fundraising events, writing about APHEDA’s work, signing up young unionist and getting involved in (and leading!) local activists groups.

To get more involved in local APHEDA groups, visit our website or contact our National Organiser, Jarred.