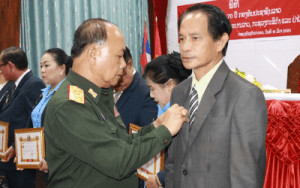 Union Aid Abroad-APHEDA is about people – people working together to make things better for all. As the global justice organisation of the Australian union movement, each and every APHEDA supporter, member, partner, activist and participant here in Australia and all around the world contributes to the work it takes to tackle inequality and injustice. This month we speak to Inpeng Meunviseth, the Director of the International Relations Department of the Lao Federation of Trade Unions (LFTU). Inpeng gives us a unique insight into the world of asbestos organising and worker’s rights in Laos.

I first met Inpeng in 2004, when APHEDA began working with LFTU on occupational safety and health. Inpeng has been a leader in asbestos awareness raising and campaigning since that time. He was a participant in the CFMEU training program on safe removal of asbestos and now convenes the Lao Ban Asbestos Network, and is actively working to register it as Laos’ first ever OSH-focused non-government organisation. It is great to see our close partnership and collaboration over many years being highlighted by APHEDA and I am looking forward to future successful collaborations protecting the health of Lao workers.

How long have you been working with the LFTU and what is your role?

Trade Unions play a crucial role in protecting the benefits and right of members and workers across the whole country. Many Lao workers are unskilled and have a low education level, which leaves them vulnerable to exploitation. Some Lao workers from remote and rural areas don’t go to school or others only attend for four or five years. After school, they tend to come to the cities to find work in factories or agriculture. Employers and managers don’t organise or train the workers and they remain on low wages and in low-skilled jobs and often migrate to Thailand.

LFTU worked to review the minimum wage in 2018, with an increase to 1.1 million Lao Kip (about AU$170.00). However, two years on, LFTU are working toward both monitoring the roll out of the existing minimum wage to see if it is actually being passed on to the workers by employers and advocating for an additional increase, as it has not yet been reviewed. The cost of living is increasing in Laos so we are now discussing another increase in the near future.

What has been one the most significant achievements of the LFTU in improving benefits of Lao workers that you were personally involved in?

Organising workers in the private sector. Laos is transitioning from a closed to an open economy and the private sector is growing rapidly. Organising workers in the private sector and foreign investment companies is a challenge because of the pace of change and the resources available. LFTU plays a very important role in organising and protecting the rights of workers – negotiating collective bargaining agreements and resolving labour disputes – grassroots members and workers don’t have a good understanding of the role and structure of trade unions, the budget is limited and there is a high staff turnover within the LFTU at the central level, as they gain experience and move on. 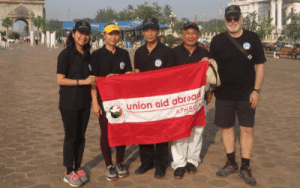 Union Aid Abroad – APHEDA works around the world to support trade union development and movement building. APHEDA plays an important role in assisting with technical support. This assists our staff’s capacity development, union work in organising in the private sector, collective bargaining, health and safety, international union coordination and networking, especially for the asbestos project. The LFTU, with APHEDA’s support, has undertaken a learning exchange with Australia and shared other countries experiences of asbestos. Asbestos is very dangerous for the health of people and workers – this is our biggest project with APHEDA.

What has been the biggest key breakthrough in moving toward a ban on asbestos in Laos? How did the LaoBan network and the LFTU OSH team contribute to this?

The biggest breakthrough from the APHEDA-LFTU project has been that many people as well as workers in the government and private sector, now know about the dangers of asbestos. Some asbestos roof factories have closed because of the transition towards non-asbestos materials being used in roof sheeting. In the past, Laos imported 8,000 – 9,000 tonnes of asbestos. But this has been reduced by 50% because the Ministry of Labour and Social Welfare (MoLSW), and health and industry all now understand the risks and have reduced imports.

What part of your work are you most proud of? Why?

I have been working at LFTU for 34 years and have learned a lot regarding the protection of, benefits and the rights of workers. I have learned many things and had new experiences especially on the issues of Occupational Safety and Health (OSH), Collective Bargaining Agreements (CBA), migrant workers and Asbestos. I am so proud of APHEDA’s contribution to assist LFTU. In the projects that APHEDA has supported, I have been able to organise mobile training for OSH and the dangers of Asbestos in many factories across the country. I feel proud of my work with LFTU and being able to help Lao workers to protect their rights and benefits as workers.

Through APHEDA, Australian unionists are vital supporters who assist LFTU to develop its members’ capacity and help the trade union movement in Lao PDR to achieve our short and long terms strategies and plans. One more significant thing that APHEDA and Australian union members have contributed to was the development of coordination and networking with unions in neighbouring countries.

Not a member? Join the Global Justice Organisation of the Australian Union Movement today! www.apheda.org.au/join/