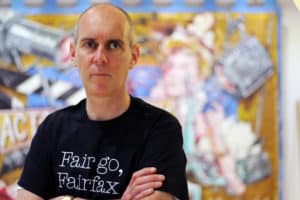 This month we spoke with Mark Phillips, Communications Director at MEAA. Mark has been an active member of Union Aid Abroad APHEDA for over a decade and shares his thoughts on why he feels it is important to support global solidarity and the work of APHEDA.

I joined my union, the Media, Entertainment & Arts Alliance (MEAA), way back when it was still called the Australian Journalists’ Association (AJA) in the early-1990s. I had only been in my job at a small tri-weekly newspaper in northern Victoria for a month, but it was important for me to join the AJA because until I did, I didn’t feel entitled to call myself a real journalist. The AJA is the custodian of the journalists’ code of ethics and has an incredible history of more than 100 years – believe it or not, one of its founding members was Rupert Murdoch’s father!

Within weeks of joining the AJA, I had organised for a union official to visit our office – which hadn’t happened for years and years – and we were able to force management to implement a roster that allowed us all to have proper time off for the weekends and nights we worked. The general manager wasn’t too happy, but that’s the power of collective action for you!

The MEAA celebrates 25 years this year – in 1992 the journos merged with the unions for actors and theatrical and venue workers – so I’ve been a member as long as the union has been in existence.

As my career progressed, I became involved in the MEAA as a delegate at the Herald & Weekly Times, during which time I was involved in the bargaining with national management at News Corp for our EBA, and as a branch council member.

To me, it’s a no-brainer to be in your union, particularly for journalists because we are in a job market with shrinking opportunities and where exploitation, bullying and overwork are commonplace in workplaces where the union isn’t present. But in those where we have a strong membership, we have some of the best conditions and pay for journalists anywhere in the world, and that’s the result of the collective action of union members.

To be totally honest, I knew nothing about APHEDA until I began working for the union movement almost 10 years ago. When I started at the ACTU, I quickly found out more about APHEDA and it just blew me away that it does so much fantastic work in so many places. What I’m most impressed about is that APHEDA doesn’t believe that aid is a hand-out, but is committed to empowering workers and their communities to become self-reliant. I also love the human and workers’ rights advocacy of APHEDA  on issues such as apartheid in South Africa, the occupation of Palestine, the treatment of asylum seekers, the plight of the Rohingya people in Myanmar, and the scourge of asbestos throughout south-east Asia. I’ve now been an APHEDA member for almost a decade.

With Julie Bishop as foreign minister, Australia has been abrogating its responsibilities as a wealthy nation and a global citizen to help people in other parts of the world. The current government isn’t interested in overseas aid unless it can get something out of it. It’s a transactional approach in which aid is used as a bribe to further the government’s objectives; witness the grubby $55 million deal that was done with Cambodia to take asylum seekers in return for extra aid money.

Bishop has also overseen savage cuts to Australia’s foreign aid budget, $12 billion under the Abbott/Turnbull governments. So more than ever, APHEDA needs donors to dig into their wallets. The minimum membership is just $15 a month – most of us spend more than that on coffee each week. So just do the maths: 20,000 by $15 by 12 would generate an extra $3.6 million for APHEDA each year, which is money going directly into programs to help people in the developing world.

As I said, I love the advocacy of APHEDA but over the past two years I have taken particular pride in a joint project between my union, MEAA, and APHEDA called the Balibo Five-Roger East Fellowship. This is a program of financial support for journalists and journalism in Timor-Leste. As you can guess, it is named after the Australian journalists who were murdered by Indonesian troops before and during the invasion of Timor in 1975. Through the fellowship, we aim to remember the names of the Balibo Five and Roger East, to build links between journalists here and in Timor, and to strengthen independent and investigative journalism and press freedom in Timor. So far, there have been three Timorese beneficiaries of the fellowship, and we are currently assessing the next round of applications.

I’m also proud that APHEDA uses one of my photos – from a union rally in 2015 – on its brochures!

It seems as if globalisation and free trade are stripping communities of their ability to sustain themselves economically in the way they did traditionally, plundering the environment from which they drew income and forcing them into servitude to multinational corporations. So I see the most important work for APHEDA as continuing the self-empowerment of communities in developing nations so they can avoid being made victims of globalisation, particularly in our corner of the world.

I say that APHEDA is the global justice arm of the Australian union movement, and as unionists we must be aware that we are part of a global movement and our commitment to the cause does not end at Australia’s borders. Solidarity between workers is international. I explain some of the projects that APHEDA does overseas and how for just a few dollars a week they can make a difference. I gave this pitch at a number of workshops during the ACTU NexGen organising conference in Sydney this year and people liked it!