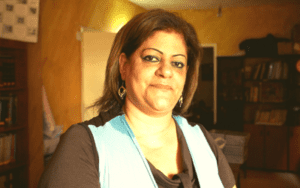 Dr Mahmoud is the founder of Union Aid Abroad – APHEDA partner organisation, Palestinian Women’s Humanitarian Organisation (PWHO). Dr Olfat Mahmoud is a Palestinian refugee, a descendant of the Christian and Muslim people who were forced from their homeland in the 1948 Nakba, ‘Catastrophe’, and who fled Palestine in the period leading up to – and after – the founding of the state of Israel in 1948. Catch Dr Mahmoud on her upcoming Australian Tour from July – September 2018.

How long have you been working with PWHO and what is your role?

After coming to Australia in 1986 on a community nurse training program with Union Aid Abroad – APHEDA, I was impressed with community nursing and also community health care and could see how it would benefit my people in the Palestinian refugee camp of Burj el Barajneh. We had Palestinian and international non-government organisations in the camp and I could also see, especially after having my first child, how child care services were also needed. So in 1993 I established the Palestinian Women’s Humanitarian Organisation (PWHO) and we have been providing child care and early child education services, after-school care and coaching, disability programs for children, skills training for women, and health support for the elderly in the camp. None of these services are provided by the Lebanese Government and after the Palestine Liberation Organization (PLO) left Lebanon in 1983, we had to find our own way of providing such services.

We do not have such unions for Palestinian refugees… if only we did! When the Palestinian Liberation Organization (PLO) was in Lebanon before 1983 we had unions for workers, women, students, artists, etc. I was very active in the student union at that time and we worked to get support for the youth in the camp. When I started nursing we also set up a nurses’ union to take our concerns to the PLO leadership. But this all stopped after 1983 when the PLO was expelled from Lebanon as we no longer had any formal organisation.

Without APHEDA’s support since its establishment 1984 I would not have been able to achieve the level of skills training, child care and all the other care and support that APHEDA’s financial help has enabled us to provide to camp women over these past 34 years. Nor could I have set up PWHO. APHEDA has trained hundreds of women in skills that have led to their employment. Sadly this has been restricted to the camp community as there are only a few occupations that we are allowed into in Lebanon. APHEDA has enabled us to provide safe, loving child care, early education and after-school care to thousands of refugee children. In fact we are now caring for the children of those children we cared for in the 1980s and ‘90s, along with children who have fled from the war in Syria. APHEDA, and though it, Australia is greatly loved and appreciated in our camps.

What part of your work do you enjoy the most? Why?

I really loved my work as a nurse and I really enjoy being the Director of PWHO. Even though I have gone on to do further academic studies, recently gaining a PhD, I consider that the work I have done with PWHO to be the most important and most satisfying work of my life, working with my sisters in the struggle providing such important services to our people.

Without the support of Australian unionists we would not have been able to train so many women in work skills nor provide all of the services to women in the camps over the last three decades. We don’t have a government, we don’t have a liberation movement in Lebanon to support us and so without Australian unionists’ support none of this critical work would have been achieved. In addition we have employed many women in our organisation over the years and these jobs have sustained whole families as many women are widowed from the wars that we have had to endure for decades.

There have been many unionists who have visited us on organised visits. Some unionists have stayed in the camps with us, providing services as well as training and mentoring and we are very grateful for this assistance. We really need more Australian unionists to come and visit and see how we are existing in these camps and to tell other unionists about our situation, unchanged for 70 years.

You are coming to Australia to launch your book. Why should people in Australia read your book?

My book chronicles my life and the story of my family and through this the lives of more than 4 million Palestinian refugees outside of historic Palestine. It also mirrors the life of millions of refugees around the world. My aim with this book is to raise awareness of our lives, of the plight of millions of Palestinian refugees stuck in camps such as mine. The book also aims to build up financial support for our training and our basic support to children and women. More significantly we want to work with Australian unionists for our Right of Return to our homeland. To return to have a government of our own, to have our own land and jobs and trade unions, to be a people on our own land with dignity and autonomy.

Why is it important for the world to understand what is happening in Palestine?

It is 70 years since we were driven from our homes and our villages by the Israelis before and during the establishment of the State of Israel in 1948. Seventy years of living in poor, miserable, unhealthy and unsafe refugee camps. Seventy years of wars and conflict. Hundreds of thousands of my people have been killed, and some in horrific massacres.  My people want to return home. They were given that Right of Return by the United Nations in 1948 and by the international community including Australia. At the time the UN stated that Israel would not be permitted to join the UN until that right was honoured. This promise to us, along with so many other promises, has never been delivered. It is this Right of Return that we are fighting for. The principal aim of my book is to get people such as Australian unionists to help us gain our basic rights and specifically our Right to Return to our villages and lands in Palestine.