This month we introduce you to Ramona Mitussis. Ramona is a TAFE organiser for the State School Teachers Union of WA, and is highly active in Union Aid Abroad Perth. Earlier in her career Ramona was also one of the very first APHEDA people working on the ground in Dili, arriving less than three months after the East Timorese independence referendum in 1999.

What does it mean to be union to you?
RM: It’s about working with people collectively who believe in the same things – and want to make not just their working lives but the world a better place; a fairer place and a more just place to live in for everyone.

What does it mean to be APHEDA to you?
RM: Having worked for Union Aid Abroad in Timor, I know that the ethos is about working closely with other communities to empower and skill them up to improve their lives. It’s not about telling people what to do, or imposing some pre-determined solution to their problems. It’s about enabling and empowering people to find their own appropriate and workable solution.

Why do you think it’s important for APHEDA to grow its membership base, those contributing monthly to the work, to 20,000 by 2025?
RM: I think to be fully able to put in place its vision, APHEDA needs to be self-supporting – financially and politically independent. It would be great not having to rely on the funding whims of government!

What part of APHEDA’s work are you most connected to/proud of? Why?
RM: The work in East Timor! Some of APHEDA’s early work there was supporting the growth of the union movement at a time when many East Timorese were being exploited by international companies who were keen to maximise profits rather than assisting local communities to rebuild after the destruction of the Indonesian withdrawal.

And the asbestos campaign – given WA’s history with asbestos this campaign is so important for Western Australians to support! During my stint in Timor, APHEDA worked closely with the East Timorese to put in place some basic standards for asbestos removal from buildings destroyed by the Indonesian army. It wasn’t something that any of the other international agencies were thinking about! We actually had to take on the likes of the UN and the World Bank to help protect East Timorese workers, who at the time were removing huge quantities of smashed-up asbestos with no protection at all.

What do you see as the work (areas, issues, etc.) that is most important for Union Aid Abroad to focus on into the future?
RM: One of the most important areas is supporting the growth of union movements in countries without a strong tradition of independent trade unions. And of course, education and skills development to enable people from disadvantaged backgrounds to participate more fully in economic and civil development in their communities.

When you have one-on-one conversations with people asking them to join Union Aid Abroad as a member how do you describe the work and ask people to join? Do they say yes?!
RM: The thing I often say is: having worked for APHEDA, I know that your contribution goes a long way! I’m confident that my financial contribution ends up where it needs to be. I don’t necessarily have that level of confidence with other organisations but I do have it in APHEDA – to deliver the maximum support and funding from my contribution to where it needs to go.

We have standards that we’ve won and set for ourselves in Australia around wages, conditions, education and training. We should be doing what we can to ensure those standards and opportunities are not only available to Australians but are available to people around the world. APHEDA is one of the best ways you can do that! 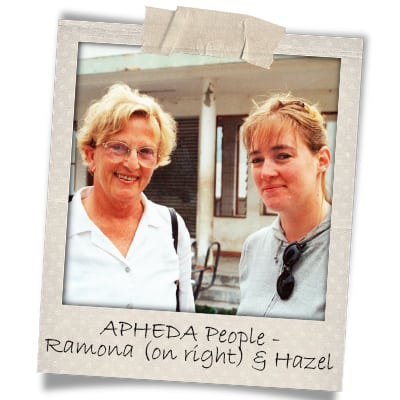 Here is Ramona (on right) pictured alongside former APHEDA patron Hazel Hawke in Dili in 2000.