This month we spoke with Saina Tomi, an Organiser for Samoa First Union (SFU).  SFU was formed in June 2015 and is the first private sector union in Samoa. Union Aid Abroad – APHEDA has been proudly involved in the formation of SFU. SFU is also supported by Australia’s National Union of Workers (NUW) and New Zealand’s First Union as well as their international unions.

How long have you been working for Samoa First Union and what is your role?

I’ve been working since the establishment of the Samoa First Union two years ago.  I am one of two people who work for SFU, the other is Michael Afamasaga.

I am an Organiser and coordinate the work of the union office.  My role is to identify those who are eligible to become members and to talk to them about being union members if they are working or to support us if they are not.  Most people in Samoa work in the private sector and our laws are not complied with, so I talk lots about what workers’ rights are and how we can improve our lives if we had more compliance from employers.

Being Union is about working for justice for all. I feel proud to be able to work to make Samoa a fairer country for those who work. People from other countries sometimes treat Samoan workers as if they are docile and passive. However, although we try to be happy people we are also proud and we don’t like being taken advantage of. Samoans are connected through close-knit communities and believe in caring for each other and that is why being union seems like a very natural thing.

My passion is to support ordinary people especially people who are not used to being listened to and having the opportunity to talk about their dreams for themselves and their families.  I love working with the whole group but I love seeing the change in one person when they understand that they are important to the whole group.

What is the biggest challenge to building the union movement in Samoa?

The biggest challenge that we have is to be able to give people an experience of being union.  We are the only private sector union and we are the only union that tries to campaign and build awareness about workplace laws and justice. There are some staff associations in Samoa but we want to be a dynamic group of members who are working together and educating ourselves about our rights.

We need to do more education and training so we can improve the expectations of workers about being treated fairly.  And some of our workers go to other countries to work and they need to understand how to access their rights in other countries too.

What do you see as the work (areas, issues, etc.) that is most important for Samoa First Union to focus on into the future?

Why is it important for union members in Australia to support Union Aid Abroad APHEDA?

I feel that it is important for Australians to understand why they support APHEDA and my obligation is to work to my best ability to show Australian APHEDA members that we are doing our best to build our union and become part of the global movement. This is an important opportunity for us to build a union that can protect us from the changes caused by globalisation and climate change.

We recently represented more than 700 people who were retrenched from Yazaki (a car components manufacturer for Toyota). We had good support from the National Union of Workers (NUW) who assisted us to negotiate a fair deal for workers who lost their jobs (read RadioNZ story which quotes Saina). Our members got much more than the legal minimum and that is important because there are not very many jobs in Samoa.  There are bigger companies from China coming to Samoa and opening big stores but employing few locals. Even in the Construction industry, workers come from other countries and some are paid more and some are paid very poorly.  Both ways the money leaves Samoa and this is not good for our community.  Our country is very dependent on remittances from family members because we don’t have enough jobs. 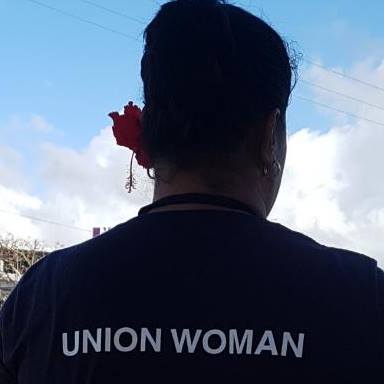