Serena O’Meley is a long-standing community and union activist, and works as an Industrial Organiser for the National Tertiary Education Union.

What does it mean to be union to you?
SO: It means working collectively for a just society, where opportunities and economic independence are shared.

What does it mean to be APHEDA to you?
SO: We who work in the union movement are extraordinarily lucky to be able to do what we love for a living.  Union Aid Abroad – APHEDA enables us to share our good fortune and participate in the global justice movement through an organisation that lives the union movement’s values.

Why do you think it’s important for APHEDA to grow its membership base, those contributing monthly to the work, to 20,000 by 2025?
SO: APHEDA cannot rely on government money for its work because in many areas its goals are proudly political and focused on social change.  If APHEDA were able to reach this membership target it would be able to increase the number of projects that it is involved in tenfold.  It would create a stronger network of activists whose global solidarity work could be transforming on a much larger scale.

What part of APHEDA’s work are you most connected to/proud of? Why?
SO: My favourite memory is of being involved with an APHEDA dinner which raised funds in association with the Australian Association for Humanitarian Aid for the William Soler Children’s Centre, Havana, Cuba in 2002. It was inspiring to work with a group of very experienced union officials and community activists, including Tas Bull and Joan Coxsedge, and a real privilege to be asked to MC the Melbourne event.  The money we raised went towards the purchase of essential equipment for the hospital, including an X-ray machine, at a time when the US embargo made such purchases difficult.

I strongly support the current major campaign on Asbestos. Not here. Not anywhere.  Asbestos is sneaking back into this country in imported building products and car parts.  At the same time people in other countries are being forced to work with asbestos, and rubble from its manufacture and disposal is being dumped in their communities.  Solidarity partnerships between APHEDA members in the MUA and local activists in countries like Indonesia means there is a much better chance of winning a global ban on the manufacture and export of the material.

What do you see as the work (areas, issues, etc.) that is most important for Union Aid Abroad to focus on into the future?
SO: Although APHEDA was set up as an overseas agency, I would like to see its involvement expand to projects run in conjunction with Aboriginal communities in Australia.

When you have one-on-one conversations with people asking them to join Union Aid Abroad as a member how do you describe the work and ask people to join? Do they say yes?!
SO: I talk about APHEDA being the union movement’s own global justice and aid agency and use concrete examples of its work to talk about the partnerships with communities which are at the heart of its organising model. In a context where people know that many of their colleagues are joining up and becoming actively involved, they are much more likely to say ‘yes’ to joining. 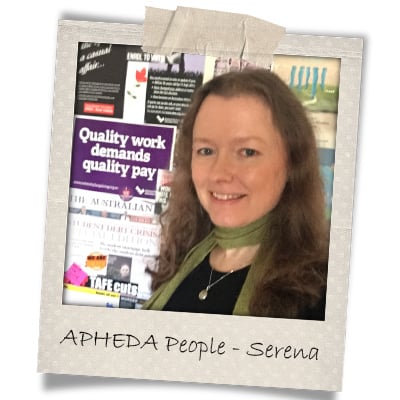