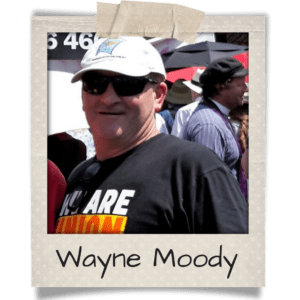 We all have some skills. We all have a passion for a fair and equal society where everyone has the same opportunities. However, we know if we don’t stand together we will be given what they think we should get. History tells us that when we stick together and build the movement, we can make it better for all; not just the few.

I have known of Union Aid Abroad – APHEDA since becoming a union Organiser back in 2000. I was always asked to support APHEDA by buying raffle tickets from my colleague, Paul Reid. However, at the time, I didn’t really know much about the work they did or how they did it. When I started at the ACTU Organising Centre I quickly found out more about APHEDA. The fantastic work APHEDA does in so many places just blew me away. They are there where it counts.

What resonated with me the most about APHEDA is that it is about solidarity, not charity. They are committed to empowering workers and their communities to become self-reliant through health and education. APHEDA and their partner organisations make a difference that improves the lives of many. So for me, that’s what it means – real solidarity – to be part of APHEDA.

As we have just seen in this current Federal Budget there is little money for overseas aid. There have been savage cuts over the last few years with cuts like $12 billion under the Abbott/Turnbull government. We are a rich country and should be able to contribute a little to lift the standards in other counties. So now more than ever, APHEDA needs supporters to become members and contribute a small amount each month. The minimum is just $15 a month and when you think about the work they do $15 is reasonable (and tax-deductible!). Imagine what APHEDA could do if all union members contributed just $15 a month – money which goes directly into programs to help workers and communities around the world in places like Myanmar, Cambodia, Laos, Vietnam, Samoa, Indonesia, Timor Leste, South Africa, Pakistan and more.

The work I feel connected to the most is the work around asbestos. I learnt about this campaign in 2014 when then Organiser, Simon, come into one of our Training Courses and presented on the Asbestos. Not here. Not anywhere. Campaign.

We were shown photos of children playing in asbestos fibres without knowing the dangers. The fact that asbestos is still mined, manufactured and used really hit home.

In Australia, we know that asbestos kills. However, I bet Australia doesn’t know that in other countries it’s still being used. Every single day thousands of people are still exposed to deadly asbestos and as long as asbestos is being used anywhere, it remains a risk everywhere.

Continuing the Asbestos campaign into other countries so they can develop the skills and education they need to avoid being made victims of the global asbestos trade, particularly in our corner of the world.

When you have one-on-one conversations with people asking them to join Union Aid Abroad as a member how do you describe the work and ask people to join? Do they say yes?

I use the opportunities I have working for the ACTU Organising Centre to go through the work that Union Aid Abroad – APHEDA  does, the achievements they have made and the Projects they are involved in. I get people to understand and to see that if we can build the standards overseas, there will be less opportunity to outsource overseas. When we join together, we can make a change. In this day and age, we need a have a  global focus. With Union Aid Abroad APHEDA we can make a contribution to something we know is achieving this. It’s about solidarity. Not charity. Join!