Wiranta Yudha is the Coordinator of LION (Local Initiative OHS Network), a health and safety organisation in Indonesia campaigning for an asbestos-free Indonesia. Union Aid Abroad and LION are working together with Australian unions and asbestos experts to provide funding and support to the Indonesian campaign.

It means comradeship, power and better chance to have social justice for all. First, it is comradeship. It is only in the union where we have the opportunity to meet and make friends with amazing people from different backgrounds and learn from them. The best part of it is we will have an army of friends to help us. The second and the third, since we have an army of friends, we have the power to fight for a better place to live, social justice for all. We learn many great things the union can do from history and many of us witnessed them or even taken part in those great things.

I am part of the global movements for a just world.

The number matter to support APHEDA’s important work across the globe. More members mean more people join the global movement for a just world, which also means more support to all the people who fight for better place to live and a better place to work.

What part of your work are you most connected to/proud of? Why?

The most important achievement of this campaign is the recognition of the Government of Indonesia on asbestos related disease. This is the first time that asbestos-related diseases are being recognised in Indonesia. It is the result of series of activities since 2008 when asbestos issues were introduced for the first time to the labor and environmental activists in Indonesia until now.

Last year, in 2016, as part of the campaign strategy in Indonesia, INABAN organised workers at asbestos factories. In the follow up to the organising, INABAN invited workers and former workers of the asbestos factories to perform an independent medical examination and 20 people participated in this activity. The examination found 10 people with asbestos-related diseases (ARD).

From the 10 ARD cases, one case was submitted to the Department of Manpower office and the workers’ social security agency. The Manpower office approved the case, which means the it recognised the occupational diseases related to asbestos. The approval is required to submit the case to the workers’ security agency to claim the compensation for the victim of the ARD. Last week, the third week of April 2017, the workers’ social security agency approved the case and agreed to pay compensation to the victim of the ARD. This is the first ARD case that has been recognised and compensated in Indonesia. It means, for the first time, the Government of Indonesia officially recognised a victim of asbestos and ARD.

It will be different from place to place. In a more general context, building a network of global justice movements should be an important role to be played. Neoliberalism has created inequality everywhere across the world. It has widened the gap between the poor and the rich, provoked conflict within the workers and is destroying the planet. The resistance movements against neoliberalism are happening everywhere. These movements should be connected to one another.

In the context of Indonesia, the occupational health and safety (OHS) rights will still be an important issue. It is just recently that the labor movement in Indonesia started more actively adopting the OHS issue as its strategic issue. The issue is now growing and will take more time to establish itself as one of the core issues of the labor movement. More and more unions need to take up the issue and build their capacity on OHS rights.

When you have one-on-one conversations with people asking them to join Union Aid Abroad as a member how do you describe the work and ask people to join? Do they say yes?!?

“APHEDA is a solidarity action of the union to the people in the world. It is concrete evidence of union solidarity that goes beyond countries borders, race, ethnicity, religion, or any other identities. APHEDA’s program is important to support people across the globe that fight for social justice. By joining APHEDA, it means you become part of the global justice movement. Together we are stronger.” 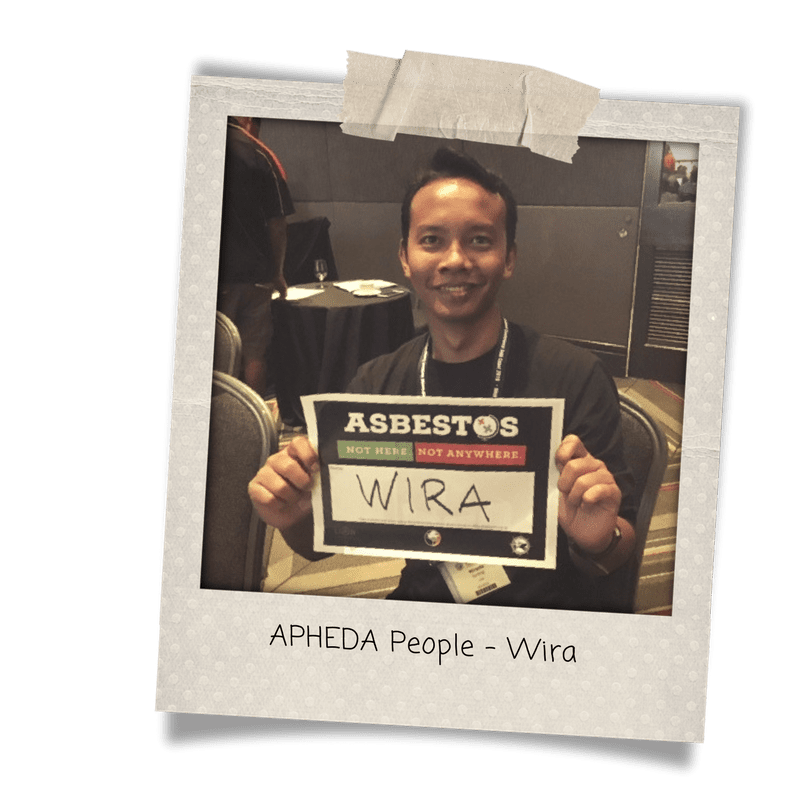