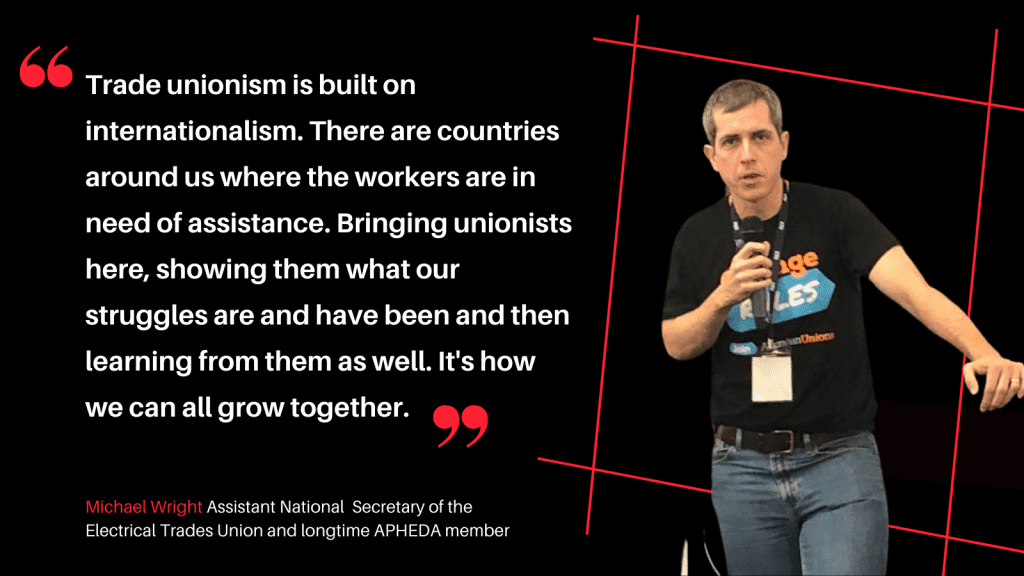 Michael Wright is the acting national secretary of the Electrical Trades Union. He has worked closely with Union Aid Abroad – APHEDA on its asbestos campaign in Southeast Asia and travelled with a delegation through Vietnam and Indonesia in 2018. Michael is an APHEDA Board member.

Can you tell me how you first got involved in APHEDA?

APHEDA being the international arm of the trade union movement meant it was the natural organisation that I gravitated towards. What got me working closely with APHEDA was the Ban Asbestos campaign. With that campaign, there is a real opportunity to entrench internationalism within my union, the ETU, because banning asbestos in Southeast Asia would have a direct benefit for our members in the ETU.

As long as asbestos is getting made anywhere, it’s going to keep turning up everywhere. So  that was the campaign that I’ve been able to seize on in my professional life, and it’s one that I’m most proud for my union to be involved with.

What is the campaign that you feel most connected to? 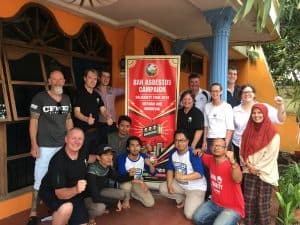 Ban asbestos tour through Indonesia in 2018.

Having had the privilege of going overseas on a lobbying round with APHEDA through Vietnam for the Ban Asbestos campaign, also brought me in contact with the good work they do in terms of getting women into politics, and campaigning on women’s rights and on workers’ rights in general.

You wouldn’t know it sitting in in Australia, but  APHEDA not only works as a grassroots organisation but gives real technical assistance to foreign governments about the future of labour law. In the case of Vietnam, they deal with a rise in the privatisation of industry, then dangers of asbestos, the benefits of increasing the representation of women in politics. The degree of respect that APHEDA is treated with by civil society, government ministries and the union movement was quite inspiring to see.

Tell me about that lobbying trip, what did you see or who did you meet while you were there?

Well going into it, I really didn’t know what to expect but our schedule was absolutely rammed.We met with a lot of the civil society actors that APHEDA supports, and we obviously met with APHEDA’s office over there as well. While we were there, we met with three different ministries. Then after that, we then went to Indonesia, where we met with the LION movement there around occupational health and safety, the Australian embassy, and Serbuk, our counterpart union.

Indonesia is such a different country to Vietnam. APHEDA was running the same campaign in both countries, but in Vietnam it was heavily bureaucratised and progress had to made through the system. In Indonesia, it was the exact opposite. It was a real grassroots movement where they were activating people at the city council and the village level, around not just asbestos but occupational health and safety in general. So, it was the capacity for APHEDA to both walk and chew gum – to work with the bureaucracy, but also the grassroots. That’s what I took away most from it was the organisation’s flexibility to get the outcomes that workers need.

I just see unionism as being a natural part of life. There will always be an inherent disparity in bargaining power between workers and employees, particularly with the way capital works these days. So, unionism is just essential. Otherwise, we’re just grist for the mill.

The scale of the operations that we’re now bargaining with these days, is beyond anything that was contemplated by Adam Smith or the like. The importance of unions, and the centrality to ensuring that we have a decent future for everyone, has never been stronger.

Trade unionism is built on internationalism. The idea for trade unions didn’t start in Australia, it came from overseas. And it gets back to that basic principle that you do what you can, when you can. For instance, Australia is a part of the Pacific and Southeast Asia. There are countries around us where the workers are in need of assistance and we’re able to provide that support by bringing unionists here, showing them what our struggles are, and then learning from them as well. It’s how we can all grow together.

There is also a self-interested aspect to it. We all know the story about manufacturing and jobs leaving Australia over this last thirty years. It’s not unique to Australia and it’s not just manufacturing. What drives this is international capital taking advantage of the cheaper wages overseas. So not only is it morally the right thing to do to support our comrades around the world, it’s also in our own self-interest. If we have an organised workforce throughout Southeast Asia, throughout East Asia, throughout South Asia, then that doesn’t just create better jobs there, but it improves our job security. And it means that competition will be based on quality, not exploiting the most vulnerable workers.

The news has been full of coverage of Russia’s war on Ukraine and the floods in Queensland and in New South Wales. What role do you think unions can play in promoting peace and action on climate change?

I’m a big fan of practical, concrete steps that we can take. Now when it comes to the war in Ukraine, we’re reaching out to Ukrainian civil society organisations trying to identify if there are power workers who will be coming out as refugees. So, if they’re Ukrainian workers who are from sectors that we cover in Australia, whether they are electricians, power workers, whatever, then we’ll provide some support for them as well. And we’ll use this miserable situation as an opportunity to further instil internationalism within our membership. This is a real, concrete thing. In terms of what the assistance will look like, we won’t be telling people what they need, but it could be as simple as providing Woolworths vouchers  as complex as facilitating gap training so that they can start working as trades assistants or even potentially electrical workers in Australia for that period while they’re here.

If it works, we can then use this model for future crises when they arise.

When it comes to climate change, our work is really on the front line,, literally at the moment. In Queensland we are running a programme called Operation Energise where we go around and give free electrical inspections to members of the public for flood-affected or cyclone-affected dwellings. We’ve started an equivalent program in MSW.

Our members  can see that they’re having to respond to natural disasters more and more, particularly in Queensland but we’ve also have storms in South Australia and Victoria, flooding in New South Wales, storms throughout Victoria, and bushfires in WA – just in the last year. The climate is changing. Severe weather events are getting more extreme and more frequent. And it’s our members along with others who are bearing the brunt of that workload.

“Severe weather events are getting more extreme and more frequent. And it’s our members along with others who are bearing the brunt of that workload.”

We also have a lot of members in the coal industry. They are both in the mining of metalliferous coal and in thermal coal, but also in power generation itself. Over the last 10 years in Australia we’ve had 12 coal-fired power stations shut, so ETU members are well aware the question is not: should we or should we not transition? The question is: will the transition from coal to renewables be just or will it not?

That’s what we campaign for day in, day out. Ensuring that our members and their communities have a future.

The problem we have is that we’ve had a government for nearly 10 years that doesn’t take the opportunities that are in front of it. Scott Morrison purports to be pro-coal but, in all honesty, he’s done nothing at all. Nothing except lie to people about what the future looks like.

But there are so many opportunities. It’s an oversimplification, but in international trade the thing that kills you is shipping costs. And when you look at what we export, we export natural resources in their heaviest, raw form because we don’t do much refining in Australia anymore, unfortunately. You look at the tonnes of iron ore coal that we’re exporting when we could be refining that iron ore here, and we could be using green energy to do it. We could be using solar farms and battery storage to fund these big industrial users of electricity.

We haven’t had the leadership from the federal government. In the absence of any coordination, these projects just don’t get off the ground.

So, we are actively campaigning to ensure that our regions continue to have a good future and necessarily that future is a green future. The coal-fired power in Australia simply will not exist in 10 years’ time.