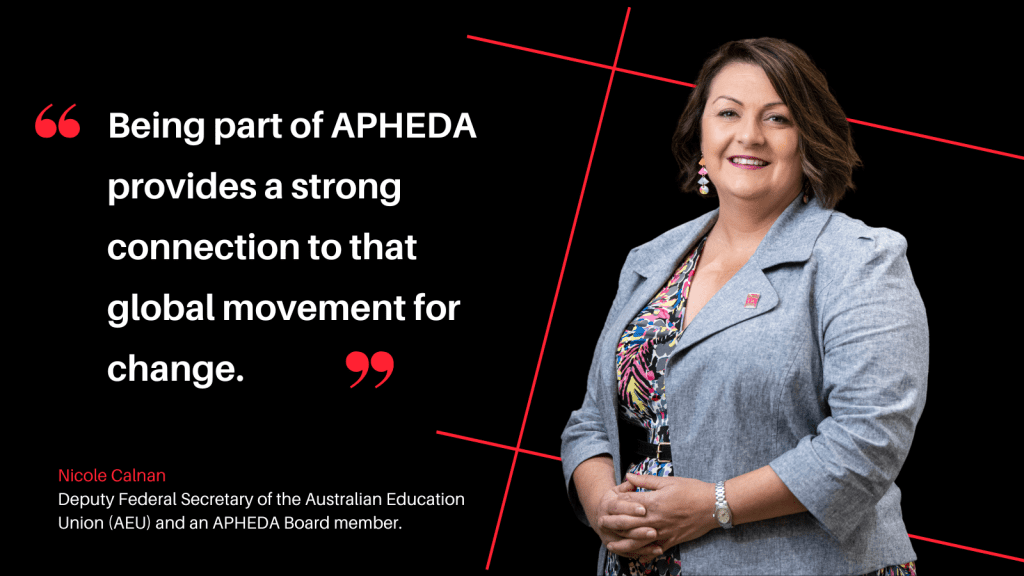 Nicole is the Deputy Federal Secretary of the Australian Education Union (AEU) and an APHEDA Board member. Before being elected to work fulltime for the union, Nicole taught in public primary schools in regional NSW.

I became active in the union early in my teaching career. I became a teacher because, like many others, I wanted to make a difference. It became very clear early on that this wasn’t as easy as it sounded and would be difficult to do on my own.  This is what drew me to the union because it was the union that was advocating for policies and funding that would make a difference for teachers and students.

Having the privilege to work for the union, being able to live your values through the work to make the lives of others better, whether that is resolving matters for individual members or working collectively with members in their workplaces, or for the union movement is pretty amazing. Knowing that the work you are doing is making a difference for other people is very humbling.

I remember hearing someone say once ‘think locally, act globally’. Being part of APHEDA provides a strong connection to being part of that global movement for change. It is through the work that APHEDA does that the workers of Australia can contribute to making a difference for workers and their families around the globe, but particularly for our neighbours across the Asia-Pacific region.

We hear every day the challenges being faced by workers around the world. We have an obligation and a responsibility to be part of a movement that cares about workers everywhere, not just at home in Australia. Building a better world for workers and people no matter where they are benefits us all.

What part of APHEDA’s work are you most connected to or proud of and why?

I’m incredibly proud of my union’s association with the work of APHEDA. I feel particularly connected to programs that build capacity among workers to advocate for themselves.

A lot of my work has been about developing and supporting the next generation of union members and leaders. Knowing that APHEDA is working closely with organisations to develop, empower and support individuals, particularly young people and women to work collectively to make a difference in their communities is very powerful.