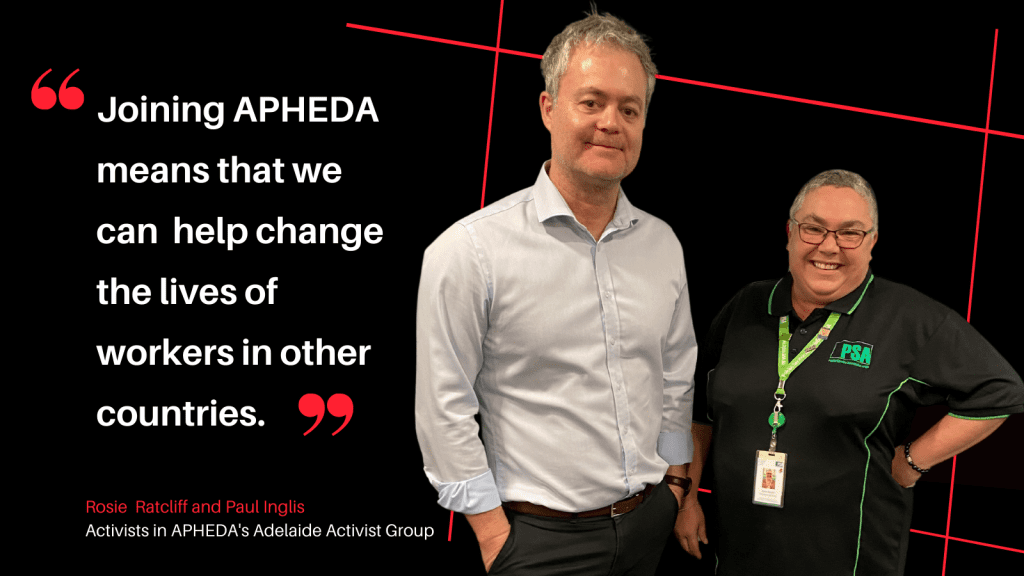 Rosie Ratcliff and Paul Inglis work at the Public Service Association in South Australia. They have both been activists in APHEDA’s Adelaide Activist Group for more than a decade.

We spoke with them about what activities their group organises each year and their experience travelling overseas on study tours with APHEDA.

They also spoke about the legacy of Terri Daktyl, a well-known union organiser at United Voice and the Australian Nursing and Midwifery Federation who was killed in a car accident in 2008. Each year, unionists in Adelaide gather to commemorate her life and dedication to social justice. In Terri’s honour, the Adelaide Activist Group raises money to fund clubhouses in Vietnam where people living with HIV/AIDS receive health care, education, and support.

Can you tell me how you first got involved with APHEDA?

I was an organiser at the Nursing and Midwifery Federation in the mid-2000s. We had an organiser there who asked me to come along to a fundraising dinner. I met these other amazing people and learned about the work APHEDA did and joined. And I’ve been involved ever since.

When I started at the LMHU, we had quite a few people who were APHEDA members. Terri Daktyl was very active and she gave a presentation to the new organisers about the purpose of APHEDA and I joined up then and there, that was about 17 years ago.

When Terri passed away, I started getting more active. I’ve done a couple of study tours, including to Lao and Vietnam.

The Adelaide Activist Group holds an annual dinner. What other events do you organise as well?

We organise the Terri Daktyl dinner in May every year and it’s a big event. Everybody gets very excited about it.

We also take the opportunity during May Day celebrations to have a raffle.

We’ve done lots of different activities, we’ve done an Easter raffle and Christmas raffle, and a sunset bowling night in the past.

Hopefully this year we can regroup after COVID. We just want to get back together again for the Terri Daktyl dinner and then we can see what other activities might be able to happen during the year.

Tell me about the clubhouses that your group have supported in Vietnam.

The money we raise from the Terri Daktyl dinners has helped build a number of houses and really change people’s lives in Vietnam. We’ve seen a massive change in people’s attitudes, and the services and support available for people living with HIV/AIDS.

The reason that came about was because on the last bike tour [across Vietnam] that Terri was on, she came across a little house with all these people crowded in there. People who were living with HIV/AIDS and their families were trying to have a support meeting. It was one of the things that Terri had said she really wanted to look into further, so it seemed to be a no-brainer after she died that we wanted to be able to try and bring that to life for her.

These clubhouses run support programmes and education. They also do work on the ground in terms of educating the public and educating the government, because in those days people who were living with HIV/AIDS were ostracised, and a lot of women and children as well.

One of the stories we heard was there was a woman whose husband had passed it on to her and had a child who was HIV positive as well. Then she visited the clubhouse and got support. She was given access to medication and education about how to manage HIV. When she had another child, because of this support, her second child wasn’t HIV positive.

It’s great that people are actively getting involved with APHEDA and have the opportunity to go overseas and see these projects. Can you tell me about your experience visiting these projects overseas?

It’s so valuable to connect the fundraising we do to the people on the ground and how we are really changing lives and building capacity in these countries. APHEDA does great work over in these countries, so it will be good to get the study tours happening again when we can.

The Lao tour was organised through the APHEDA office. And the trip I took to Vietnam I organised myself in conjunction with the national office and with team on the ground in Vietnam. There wasn’t enough material promoting the work that we were doing in Vietnam. So, we visited a whole bunch of programmes and made a number of videos about the projects.

We then showed the videos at the Terri Daktyl dinner. The ACTU trainers also showed them to delegates during training. And that really helped us connect to the people and the stories on the ground as well.

Why do you think this kind of internationalism is important for unionists to be involved in?

Union work isn’t just Australian work, and the values of supporting people extend outside of union work, they apply all throughout our lives. I think it’s just critical for us because we are a relatively lucky country. It’s really important to be able to help open people’s eyes to change that can be made in other countries and build those connections.

The struggle for workers is a global issue. We are a global movement, and we need to support our comrades and fellow workers in other countries as well. It doesn’t matter whether it’s here in Adelaide or at a workplace in Vietnam, or Laos or Cambodia or anywhere else.

We have a lot to contribute to help people build their capacity so that they can win their struggles or improve their working lives. What I really like about APHEDA’s work is that it is about capacity building. We don’t just go over there and do it for them. We’re actually working with partners on the ground to help in their struggle.

Once I visited a group of workers at a factory and they were talking about their collective agreement. Just to feel the energy in the room as they spoke about how they were going to go about organising it, how they’re going to go about building power, how are they going to identify leaders in the workplace and develop them. It could have been a meeting here in Australia. We had a group of union educators visiting them and the energy of those members was just fantastic.

My final question is, why should everyone join APHEDA?

Because we are living in a global struggle against power, against those with capital. Joining APHEDA means that we can help contribute to the work that APHEDA does in these countries and help change the lives of workers in other countries who are generally in a less powerful position than us. When we talk about taking on the boss or taking on the government in Australia, we know we’re not going to get shot. In many of these countries, when you take on the government or you take on the boss, you risk being targeted. So, why wouldn’t you join APHEDA and contribute whatever you can to that to that struggle to help improve their working lives?

It aligns so beautifully with our union values. I know of people who only contribute to APHEDA because the money goes directly to projects on the ground. If I’m going to donate anywhere, this organisation aligns with my values, for all the reasons Paul said.

[The Terri Daktyl dinner is being held on 27 May, 2022 at Vietnam Sunrise, 285 Henley Beach Road, Brooklyn Park. Get your tickets here.]