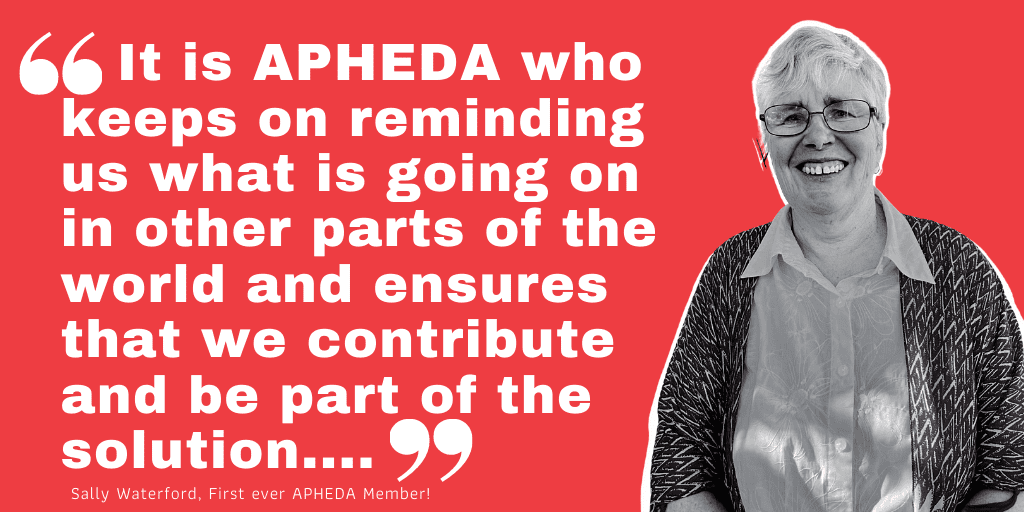 This month we speak to retired educator, activist, internationalist and passionate APHEDA member, Sally Waterford. Sally is APHEDA’s first member and we spoke to Sally about her early memories of APHEDA activism, her passion for worker-to-worker solidarity and why she believes it is important to join your Union! Meet Sally!

You are known as APHEDA’s first member. When did you join and why?

I have known Helen McCue (APHEDA’s Co-founder) since 1980 – or earlier. We shared a house together in Surry Hills before Helen went overseas to pursue her humanitarian work as a nurse. While she was away, she would write to me and it was through her correspondence the world opened up. She went to Egypt first to work with the World Health Organisation (WHO). Then after the massacres in the Sabra and Shatila refugee camps in Lebanon where hundreds (or thousands) of Palestinians were killed, Helen packed up and moved to Beirut. It was there she started working with Palestinian refugees and met Dr. Olfat Mahmoud, a Palestinian refugee, nurse and founder of the Palestinian Women’s Humanitarian Organisation (PWHO).

When Helen came back to Australia, I listened to her thoughts about an organisation she wanted to establish – one linked to the Union movement. I listened to her thoughts on what this organisation should do and to her discussions with Cliff Dolan. When the Australian People for Overseas Aid and Development APHEDA was founded, I signed up and became a member. Not a member? What are you waiting for? Join today!

In early days of APHEDA, what do you remember about the activism?

I remember the nurses who came out for training here and meeting some of the other people who also came over in those early years. The projects are the time were based in Eritrea (now Ethiopia) and Vietnam and, soon after, the Philippines.

It was this vision of our unionists – Australian unionists – taking their skills and teaching them to dislocated peoples and refugee populations. I still think what a great vision it was and how great it was that it was adopted by the union movement here.

I didn’t visit an APHEDA project until 2002 when I visited Beirut and stayed in the camps for few nights. There was an Australian volunteer physiotherapist there who was doing some incredible work. I had met Olfat a number of times over the years through my friendship with Helen and through my membership with APHEDA. So it was wonderful to see her work with my own eyes.

When did you become a unionist?

I taught in early childhood and have always been a unionist. I then taught at TAFE and later in social services, always being actively involved in the union representing my sector. I have been with the ASU for a long time and now I am retired. I can’t believe how the word ‘unionist’ has been demonised lately. Especially now when really we need workers to gather around issues like casualisation of work, equal pay and also in solidarity with the injustice happening around the world.

What your advice for getting young unionists involved in internationalism?

Learn about other countries. Visit. Gain knowledge about how the goods that we have here are made and the conditions that they are made under. Take that on as a cause. Are the workers exploited? Be willing to look beyond where we live and work and take a look at what is going on around the world. Most importantly, join Union Aid Abroad – APHEDA! We need to know what is going on in other countries and APHEDA gives us this window. The asbestos campaign is also so important for young people to learn about. The toxic legacy of asbestos is ongoing and now we are advocating continuing coal use when we know it is so destructive – to people and the environment. We are now seeing a re-emergence of black lung disease again.

Why is it important to join your union? And what does being union mean to you?

In this day and age, when work is uncertain, when we are not giving young people a chance to have permanent work, when we are giving them short and irregular shifts, we need someone to have our backs. We need our Unions to back us up and take on employers who are being unfair and who exploit vulnerable workers – migrant workers, refugees, young workers. We need Unions to come in and advocate for them to make things better for all of us.

Being Union means you come together with others in your sector to ensure good conditions. You come together in solidarity and together we are able to negotiate with employers because there is a huge imbalance between employer and employee. 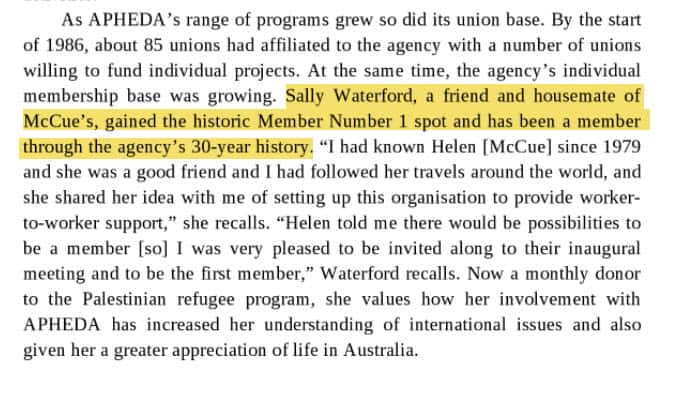 From Livelihoods and Liberation Struggles: 30 years of Australian worker solidarity

What part of APHEDA’s work are you most passionate about?

It was the worker-to-worker solidarity and support that initially drew me in. It is APHEDA taking on asbestos. It is APHEDA who keeps on reminding us what is going on in other parts of the world and and ensures that we contribute and be part of the solution.

What areas of work do you want to see APHEDA involved in?

Women. I always want to see more projects advocating for the rights of women. And secure work – people don’t have enough to live as casualisation has become so rampant. I want to see APHEDA’s work with Palestinian refugees continue. It is so difficult for families – especially young men – when you are a refugee, are stateless and there is no work to be had. It is so important to keep up the work with refugees and stateless people. More and more we have so many people on the move around the world. We need to find the heart to welcome them here. We have the responsibility to help these people find safe homes.

Meet Sally’s sister, Mary Waterford AM. Mary is also a long-time APHEDA member who has been actively involved with the Blue Mountains East Timor Sisters project.