This month we spoke with Vinnie Molina from Perth. Vinnie is a carpenter by trade and an organiser for the CFMEU Construction & General Division in Western Australia.

VM: For me, being union means class solidarity, the right to belong to a collective, and empowerment for working people.

It’s also an opportunity to talk about and repay the debt that we owe to people in Third World countries – we are lucky to live in this part of the world, but sometimes we’re lucky because others were made to be unlucky.

VM: It works in two ways: the more people who contribute financially, the more there will be people in Australia who become aware of the plight of other workers and start acting in solidarity. And the more people that are making a contribution, the more we can expand the work we do on the ground and get more people and communities involved.

VM: I admire the people I know, like Ramona Mitussis and Tom Addy, who work or have worked for APHEDA overseas – that personal commitment to leave the comforts of home and do solidarity work. These people are seen as the face of the Australian trade union movement in those countries and that really helps – I’m proud of them!

VM: Education around poverty is really important. The campaign to ban asbestos, for example, must be linked to the broader struggle to eradicate poverty. A First World perspective on the banning of asbestos is not enough. When you live in those countries in the Third World, you really don’t have much choice. When I was a young child in Guatemala, the local factory where people worked was built with asbestos – it was in roofs and sometimes in the furniture! There was asbestos everywhere. If you’re poor, it’s a miracle material! It doesn’t rust or catch fire, and it’s heavily promoted and cheap. People who live in shanties, who don’t have access to alternatives, will have an asbestos roof rather than no roof. All these things link to poverty – it’s a class issue.

To provide people with choice, we have to fight for the jobs and education that will help that choice be more real and effective.

VM: I always talk about the need to express our solidarity with other disadvantaged workers.

Construction workers are very generous. We work in a very difficult industry – a dangerous occupation. We’re generous and always put our hand in pocket and pass the bucket around for those in need. But with APHEDA, I talk about the need to link our struggles for rights globally – so I’ve been successful talking that way in our union.

People need to think beyond the local, and see what happens at the end of the supply chains. We all love to get cheaper stuff – we’re happy when we’ve saved ourselves 5 bucks, but we need to stop and think about how these goods were produced and how much money the worker making it was paid. We need to link our experiences to others’ experiences – the local and the global. It’s a relationship between people. We need to all stand together. 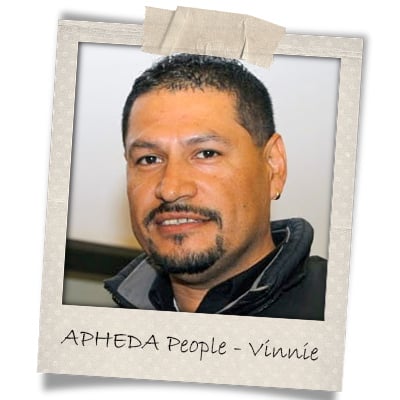