“When there is nobody else to support us, we know Union Aid Abroad – APHEDA will stand by us” – Ricar Pascoela, APHEDA People

Ricar Pascoela has been the Coordinator of the Working Women’s Centre of Timor Leste (WWCTL) since 2015. Prior to this she worked as an Advocacy Officer for WWCTL and for various Timorese NGO’s. Through working on issues of legal and social protections for vulnerable women workers, Ricar identifies working women’s empowerment as a pathway to gender equality.

How long have you been working with the Working Women’s Centre of TImor Leste (WWCTL)? 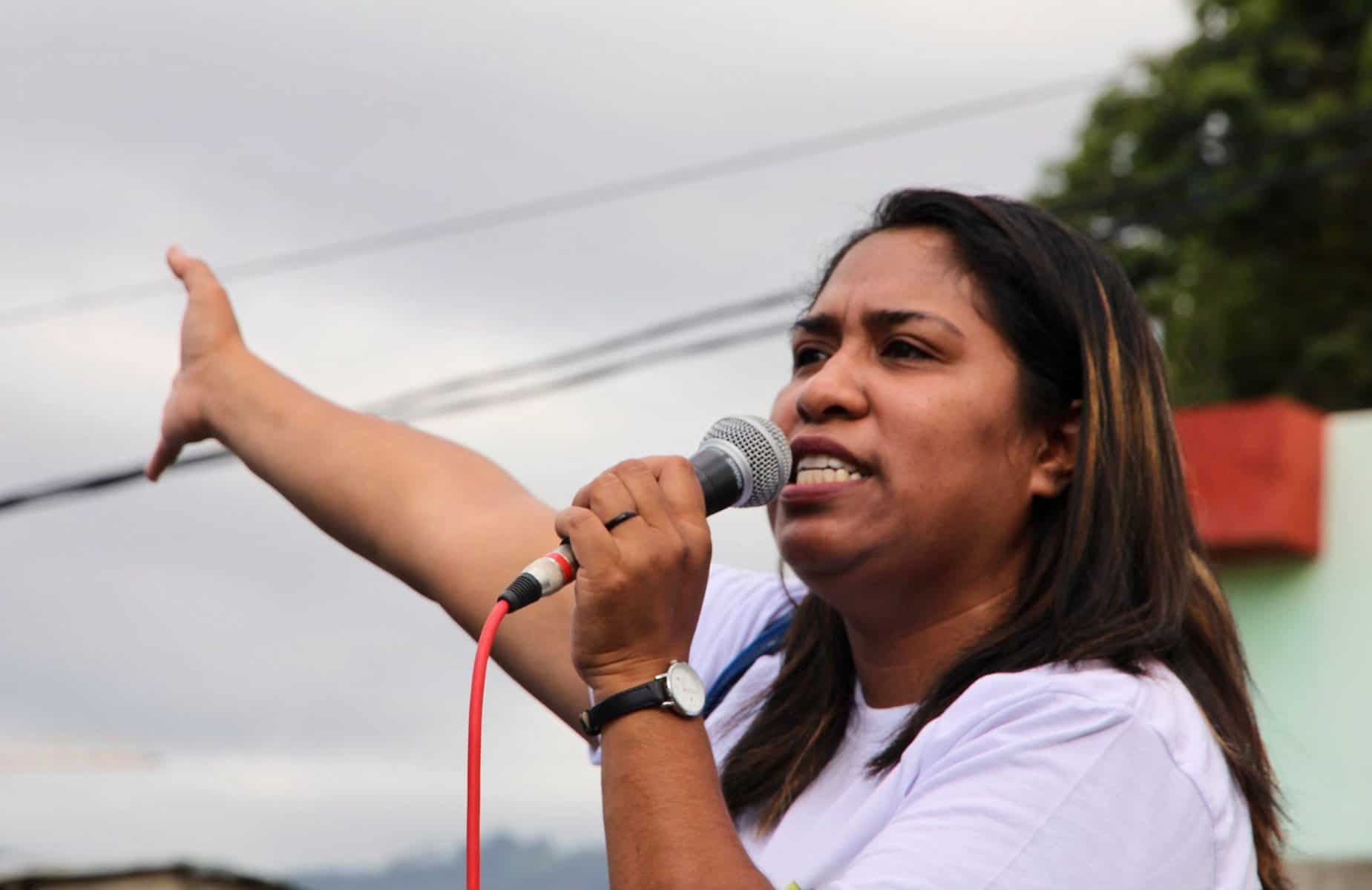 When we began to work with and advocate for domestic workers, it was a real challenge for them to get fair and equal treatment. We started a campaign in 2017 – Fair Work for Domestic Workers – to tackle the many issues they faced. It was particularly hard for domestic workers who live with their employers – they work long hours and they find it difficult to take leave. Negotiating a fair salary is problematic as the employers don’t think having a contract is important as it is not required under Labour Law.

How has Covid-19 affected the work of WWCTL?

The government has implemented a State of Emergency. When we found out, we did a quick submission to the Secretary of State Employment to request they consider domestic workers, not just formal workers, as domestic workers were losing their jobs.

We are now in the third period of the State of Emergency and employers are beginning to look for domestic workers again. Some are being called to return to work; some are not. WWCTL has contacted each employer, asking them to maintain the relationship with their employees during lockdown by continuing to pay salaries for the months of March and April. Unfortunately only 15 domestic workers were paid the full salary for March, April and May. The rest of them are not being paid at all.

After many delays, we want the legal protection of domestic workers to be realised this year.

The current political situation means everything has changed and we basically have to start from the beginning again. Our submission for legal protection of domestic workers began in 2017 and it has been close to passing a number of times. It has been going on for three years and is still pending without any prospect of the next step. One of the last things we did was to deliver a letter to Parliament House and we are still waiting for a reply. In the lead up to International Domestic Workers Day (IDWD) on June 16, we tried to lobby the Secretary of State to ask whether the law will be processed or if the government will still consider it. The Secretary of State has recently changed and it will change again. It is an ongoing challenge as the government keeps changing. But if the government is still considering passing this law, we will ramp up advocacy to see it through. In July we will start cross-sectoral meetings again with other organisations.

Usually, we use the International Domestic Workers Day as an opportunity to push for legal protection of domestic workers with large rallies on the street. However, because of COVID-19 and the continuation of the State of Emergency, we worked with FONGTIL (the peak body for local and international NGOs) to organise a nationally televised talk show instead. We invited the Secretary of State for Employment to speak and also the President of the Women’s Parliamentary Group to speak.

Posted by Working Women's Centre Timor Leste on Wednesday, 27 May 2020

Do domestic workers have social protection?

How are you working towards building the activism of WWCTL members?

How does the WWCTL collaborate with other women’s NGOs and Union Aid Abroad – APHEDA partner organisations?

WWCTL collaborates closely with other Union Aid Abroad – APHEDA partner organisations who mainly work in agricultural areas as domestic workers predominantly come from agricultural families. We deliver outreach activities and engage both Union Aid Abroad – APHEDA partner organisations and the local authorities. These workshops are held in rural areas as it is difficult for workers from these areas to understand the working situation in Dili. We provide workers with basic information and also with referral phone numbers and links to contact us if they are facing problems or if they are looking for a job.

For the cross sectoral meeting, we engage other women’s organisations as well as international and national organisations and the private sector. We call it an advocacy group and invite key local women’s NGO’s including Alola, Alfela, Rede Feto, trade unions, and the private sector – as they all connect workers with employers. This level of collaboration is unique and works well. 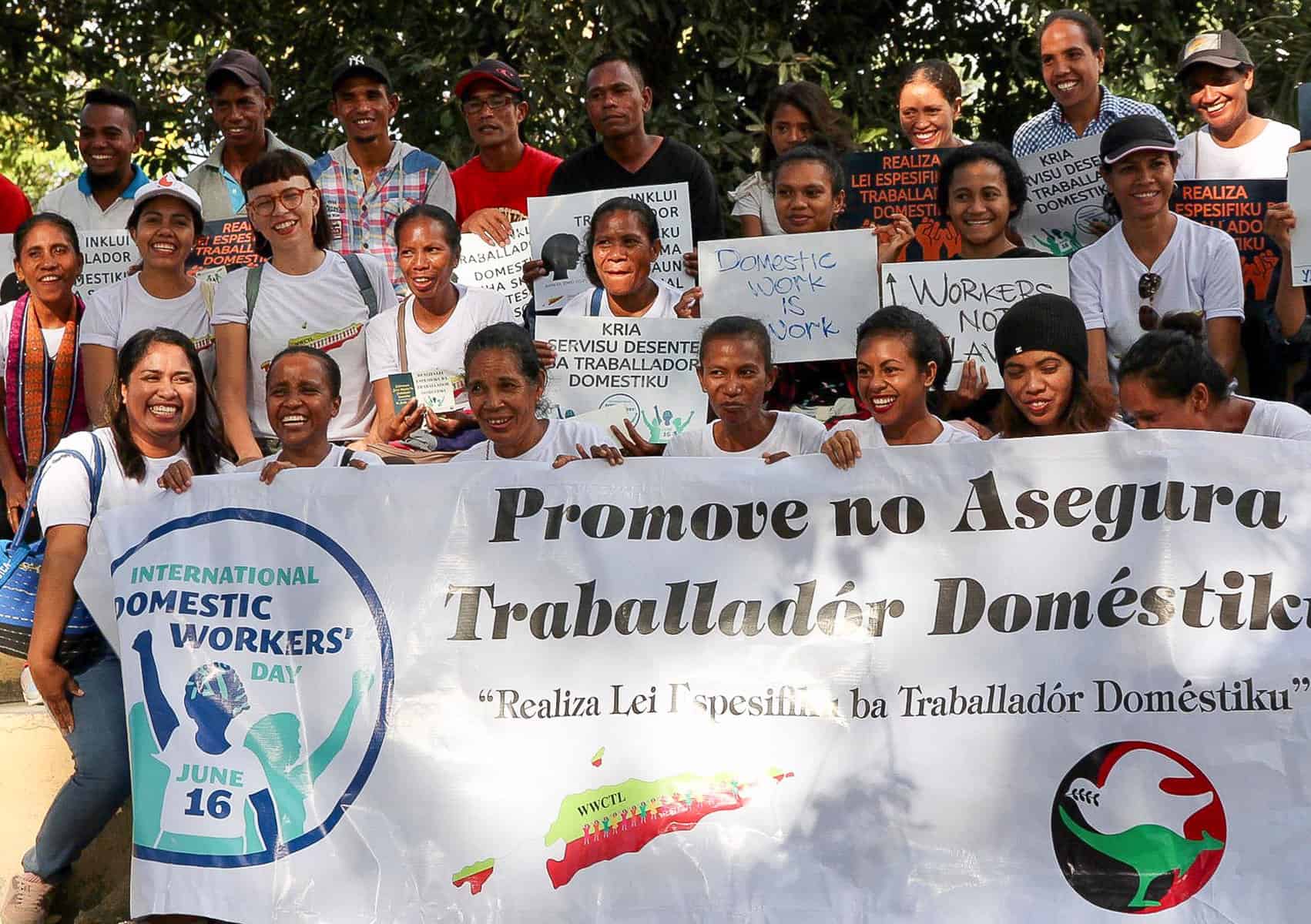 Ricar (bottom left) joined members of the Working Women’s Centre of Timor Leste (WWCTL) on the 2019 International Domestic Workers Day to demand the recognition of their workplace rights.

Union Aid Abroad – APHEDA is more than a partner for us – it is a big support network – we have been able to build our campaign through working with the other organisations linked to Union Aid Abroad – APHEDA. We are grateful to work with Union Aid Abroad – APHEDA because when there is nobody else to support us, we know APHEDA will stand by us. It is a huge support for us to do our job, particularly in difficult times. Currently it is hard for us with the ongoing challenging political situation in in Timor Leste. Other organisations are scrambling to try to get support but it is different for us as APHEDA puts big trust into us and we trust APHEDA and its members and supporters to be there for us.

Why do you think it’s important for APHEDA to grow its membership base?

The first thing that APHEDA members need to know about WWCTL is that we are the only organisation in Timor Leste that works with women workers. We are the go-to organisation for domestic workers – fighting for them and advocating for them. But we know we can do more for women workers in Timor. When we can reach more informal women workers – home industry women, vendors etc. – it will become a new focus for us. Our dreams become the centre for the realisation of working women’s dreams – to be protected and valued as workers.

Solidarity with workers of Timor Leste