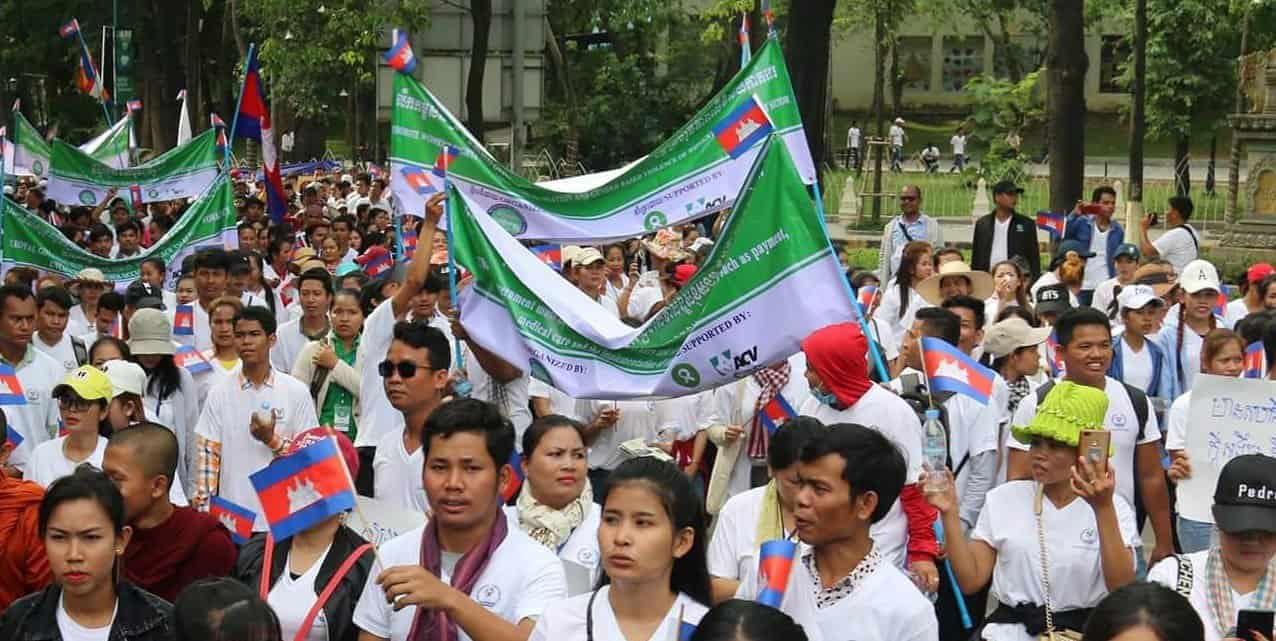 Show your solidarity with women workers in Cambodia

From 2001 Cambodia has experienced massive economic growth through an ‘Everything But Arms’ (EBA) preferred trade deal with the European Union, creating millions of jobs and lifting one-third of the population out of dire poverty.

Since the trade deal began, Cambodian unions have worked hard to ensure workers benefit from this boom with decent, unionised jobs. But recent government crackdowns on independent trade unions, and breaches of human rights led to the EU announcing it will suspend the EBA trade deal from 2020, directly jeopardising jobs, wages, and conditions.

Women majority industries will be hardest hit, with up to 1.3 million direct and indirect jobs lost in the garment sector and ancillary industries. This will force women into poverty or precarious work.

Right now, unions are fighting on two fronts – firstly, to maintain the right to freedom of association and collective bargaining under restrictive trade union laws. And secondly, to secure hard won gains in wages and conditions as the government seeks to offset the impact of withdrawal of the EU trade deal.

Union Aid Abroad – APHEDA has supported women’s livelihoods and rights in Cambodia since 1986. This has been through programs focusing on sexual and reproductive health rights, the right to access vocational education and decent work, and their right to organise.

Now more than ever though we need your solidarity to help independent Cambodian unions in their struggle to protect working women’s rights.

Donations of $2 and over to Union Aid Abroad-APHEDA’ s Overseas Project Fund Account are tax deductible.

WHAT IS THE EBA

The Everything But Arms scheme grants full duty free and quota free access to the EU Single Market for all products (except arms and armaments).

A country is granted EBA status if it is listed as a Least Developed Country (LDC) by the UN Committee for Development Policy.

EBA preferences can be withdrawn in case of some exceptional circumstances, notably in cases of serious and systematic violations of principles laid down in fundamental human rights and labour rights conventions.

The majority of growth has been within the garment sector, with the industry now employing 750,000 workers directly, and about 2 million more indirectly.

Of the almost 3 million direct and indirect workers, 86% are women.

HOW A SUSPENSION WILL IMPACT WOMEN

The inevitable loss of jobs following suspension from the EBA will impact women hardest of all.

Job losses in the garment sector of this scale were last seen in the 2009 global financial crisis, with women garment workers forced to return to their home towns and rural poverty.

Those who stayed in urban areas were often women who had rejected, or had been rejected by, rural patriarchy and poverty, and had few options other than to compete against each other for scarce entertainment sector jobs, driving down wages and conditions, and pushing many into sex work to survive.