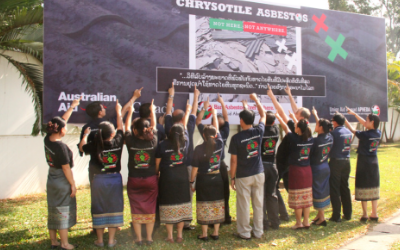 2018 saw the campaign to ban asbestos in Asia take significant steps forward. The goal of the campaign in Asia is to achieve three ban announcements by countries in Asia with focused work in Vietnam, Cambodia, Laos and Indonesia, to reduce asbestos consumption in the Asia-Pacific region and reduce the burden of avoidable asbestos related cancers and disease among workers and community. The goals of the campaign in Australia are to assist in the end of illegally imported asbestos and promote the role of the Australian government and Australian unions as leaders to end asbestos use in Asia.

Globally the campaign aims to win an effective Rotterdam Convention that lists Chrysotile onto Annex III, or an alternative Global treaty on asbestos.

The Asbestos. Not Here. Not Anywhere. campaign is our priority campaign. Union Aid Abroad – APHEDA employs two Campaign Coordinators in Hanoi and Sydney.

The asbestos lobby itself has admitted the campaign to ban asbestos by 2020 and eliminate Asbestos Related Diseases (ARD) led by VNBAN and JEH Networks and the Vietnam Trade Union VGCL and supported by Union Aid Abroad – APHEDA has forced the asbestos roof sheet industry to shrink dramatically as consumers move to alternative roofing materials. These partners are working with local networks and their members to strengthen the ban campaign and educate workers and consumers on the danger of asbestos exposure. While the Vietnam Prime Minister in 2018  announced the Government must prepare a plan to completely phase out asbestos roof sheet manufacture by 2023 at the latest, the asbestos lobby is fighting back with misinformation, denying asbestos products cause ARD’s and trying to delay any action on a ban and instead seeking the Vietnam Government to wait for a few more decades ….for more research.

Laos made great progress towards an asbestos ban in 2018.  In November, the Ministry of Health in Laos,   supported by Union Aid Abroad – APHEDA and the World Health Organisation (WHO) successfully launched the  National Action Plan for the elimination of ARD in Lao PDR. Signed off by the Minister of Health and supported by 8 other Ministries, the comprehensive plan has a proposed ban on asbestos products by December  2020. The launch was also supported by the Asbestos Safety Eradication Agency (ASEA) and was attended by CEO,  Justine Ross. During the same week, a global ban asbestos messaged billboard was launched in the capital Vientiane on a main highway, a joint initiative of the Australian Embassy,  the Office of the Embassy of  Canada and Union Aid Abroad APHEDA. This small country of Laos is in fact the highest user of asbestos per capita in the world according to recent import data. Read media release.

Union Aid Abroad – APHEDA works with the Lao Trade Union (LFTU), the Ministry of Health and the LAOBAN network.  A ban by 2020 is being opposed strongly by the asbestos lobby with misinformation, study tours  to produces countries and delay tactics similar to that used in Vietnam and other countries across Asia.

In 2018 the first National Asbestos Profile for the country was completed. Working with the Ministry of Labour and Vocational Training and  a key Cambodian trade union in the construction sector (BWTUC),  this process involved also 12 other Ministries and employers. As part of the evidence gathering for that profile  Union Aid Abroad – APHEDA worked with laboratories in Australia  to test 130 samples of construction and other materials for asbestos. The samples were tested in a Brisbane lab and more than half came back positive for asbestos. This was the first time a formal and comprehensive survey of materials had been undertaken to test for asbestos in Cambodia. The Profile will be formally launched in May 2019. The campaign in Cambodia continues to build awareness in the community, with workers, consumers  and with government representatives.

Supporting our partner Local Initiatives for OSH Network (LION), and through them the national ban network INABAN,  the focus in Indonesia has been on educating workers in asbestos product factories, winning recognition and compensation and supporting victims of ARD and other OHS incidents, building links with universities and health professionals, campaigning for  a regional ban on asbestos use in construction  and building strong networks of unions and civil society organisations. The campaign had a big win at the end of 2018 when the Bandung City Assembly, Indonesia’s third largest municipality, passed a resolution to ban asbestos from all future government buildings. This is the first time a region has done this in Indonesia.

We are working with international and local partners to win a policy change to end the use of asbestos sheeting in projects funded by the Asian Development Bank. In December 2019 the Australian Labor Party adopted into their platform that when in government they will lobby the ADB to stop using asbestos in their projects. Union Aid Abroad – APHEDA is participating in a roundtable with CBUS and a range of stakeholders and experts to make sure that Australian workers’ money isn’t going to support the asbestos industry in Asia.

Training has been delivered in three target countries and presented at international ban network meetings. The fact sheet has been translated into four languages.

We conducted research into the campaign strategies and tactics across four countries. The resulting report ‘Engaging government and Civil Society in Asia to promote a ban on asbestos’ has been distributed and presented at conferences internationally and in Australia. It is available at bit.ly/AsbestosResearchProject

We want to make 2019 the tipping point in the campaign to ban asbestos in Asia. This means locking in the roadmap to ban asbestos in Vietnam and the National Action Plan in Laos. In Cambodia Union Aid Abroad – APHEDA has funding to supply and train people to use a microscope and technical equipment so asbestos samples can be tested in country. In Indonesia, the campaign will build on the momentum from Bandung and continue to educate and mobilise workers and the community towards political support for a national ban.

Globally, we’re working with ban networks, unions and civil society to raise the profile of the campaign to ban asbestos and change the rules at the upcoming Rotterdam Convention so asbestos producing countries can’t continue to block the listing of chrysotile asbestos as a hazardous chemical. In December we fundraised with our members for the asbestos campaign raised $18,000.

The campaign activities and great progress in 2018 have been supported by your donations, Australian Aid and the Asbestos Safety Eradication Agency (ASEA).

With your ongoing support, we can make 2019 the tipping point in the campaign to ban asbestos, end illegal asbestos imports and keep communities and workers safe.