These networks are made up of trade unions, civil society groups, government, academics, health professionals and the media, with strong support from the World Health Organisation and the International Labour Organization.

Meanwhile, the asbestos industry continues to fight for the highly lucrative but diminishing markets, putting profits before safety by attempting to mislead nations into believing that there are no health consequences from chrysotile asbestos exposure. 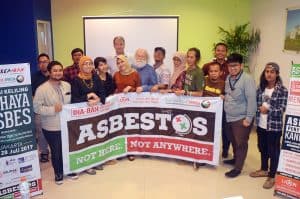 The campaign has seen significant gains in all four countries over the past few years. This includes an asbestos ban pathway by the Lao government by 2023. Indonesia has seen the first regional ban regulation introduced in Bandung City. In Cambodia, a National Asbestos Profile has been launched by the Cambodian government. This involves bringing together research about how asbestos is used, who is at risk from it, and what regulations and enforcement currently exist to understand the scope of the issue. A second National Asbestos Profile is now being developed.

An important part of the project is raising awareness among governments, trade unions and employers about the health implications of exposure to asbestos. A focus has been to bring international experience and evidence to policymakers of both the expected impacts on continued use of asbestos, on alternative safe products, and on safe disposal systems of asbestos waste. Civil society action groups have been formed to advocate for policy reform and support activities leading toward national bans on asbestos.

Achievements over the past year

In the past year, the project has had significant achievements.

In Cambodia, 200 construction workers completed training to become more aware of the risk of asbestos exposure, which has resulted in higher rates of using protective equipment at work. In addition, 200 policymakers at the provincial level are now aware of asbestos hazards and the need for regulation.

In Indonesia, a group of people who have suffered from asbestos-related diseases is actively campaigning to prevent other workers from being exposed to asbestos at work.

In Laos, a special training workshop for journalists was held to inform them of regional and national data on asbestos. This has led to more reporting about the health impact of asbestos on workers.

In Vietnam, there is increased awareness of the hazards of asbestos exposure among provincial authorities, workers and the community. A guidebook has been produced to help homeowners understand reducing exposure risk in the home and how to practice good asbestos removal.

The ongoing COVID-19 pandemic has been a significant ongoing challenge in regard to maintaining government focus on the issue. It has also disrupted many of the planned activities and events.

Despite these challenges, groups across Cambodia, Indonesia, Laos and Vietnam will continue to work towards a ban on the production, distribution and use of asbestos throughout 2022 until workers are no longer exposed to deadly asbestos.