On the 13 March 2015, the most powerful cyclone to ever hit the Southern Pacific landed in Vanuatu. Eleven people lost their lives, and 207,000 suffered damage or destruction of their homes. The cyclone severely affected food security and productive sectors including agriculture, livestock, fisheries, forestry and biosecurity.

A year later, on the 20th February 2016, Cyclone Winston hit Fiji. It was the worst storm to ever hit Fiji, with wind speeds of up to 325kpm. Cyclone Winston killed 44 people, and rendered over 50,000 people homeless. In some areas, 95% of housing was destroyed.

Australian unionists gave generously to provide support to workers and communities who had lost housing and livelihoods due to the two cyclones, donating money to two appeals launched by Union Aid Abroad APHEDA, totalling $176,000 for both countries. In partnership with local union movements, Union Aid Abroad–APHEDA has supported projects to rebuild worker housing in Fiji and Vanuatu, and to re-establish livelihoods for farmers in Vanuatu whose spice farms were destroyed in the cyclone.

Union Aid Abroad-APHEDA identified two projects in Vanuatu. The first was to support the Vanuatu Council of Trade Unions (VCTU) to rebuild housing in the settlements around Port Vila, through the provision of roof sheeting to households who had suffered severe damage to their homes.

During the roof sheeting distribution process, the Vanuatu National Workers Union also signed-up over 20 workers at the Bluescope factory. Bluescope had never been organized before!

70% of the Vanuatu workforce are semi-subsistence farmers. The majority of these farmers had their livelihoods destroyed by Cyclone Pam. In recognition of the importance of agriculture to the Vanuatu economy, Union Aid Abroad-APHEDA partnered with the Farmer Support Association to support spice farmers to reestablish cash crops destroyed by the cyclone. Eighteen months after the cyclone destroyed their crops, 14 farmers have re-established their vanilla plantations, with a further 27 farmers looking to partner with the association. The second group of farmers elected to rebuild their houses and re-establish their household gardens impacted by the cyclone – and subsequent El Nino induced drought – before focusing on cash crops.

Funds raised through the appeal have been used to provide vouchers to households who suffered severe damage to their housing. A review of villages affected by the cyclone found that while households had been able to obtain materials to rebuild housing by the cyclone, they continued to live in tents and under tarpaulins as they were unable to pay for the labour to rebuild.

The funds donated by the Australian union movement have been used to pay for labour for the reconstruction effort. This has a dual benefit – not only does it support those left homeless by the cyclone, it also is a necessary injection of funds into the Fijian economy, and brings new cohorts of workers into contact with the Fijian union movement.

This is a critical period for the Fijian union movement. Years of anti-union and anti-worker decrees that were put in place by the Bainimarama government were lifted in February 2016. These decrees had severely impacted unions’ ability to organise. The FTUC’s management of the cyclone response provided an opportunity for the Fijian labour movement to reestablish their visibility in Fijian communities, and amongst union members and potential members. 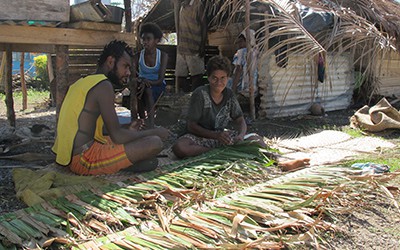