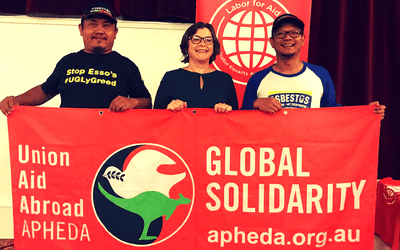 Two Indonesian anti-asbestos activists visited Australia in May to participate in May Day events and publicise the Asbestos. Not Here. Not Anywhere. campaign. Darisman of Local Initiative for OHS Network (LION) and Subono the General Secretary of SERBUK, a union with coverage of asbestos factory workers. Darisman and Subono visited Melbourne, Sydney, Brisbane and Perth over 10 days.

One of the highlights of the tour was our visitors participating in May Day marches and celebrations in Melbourne, Sydney and Brisbane. Darisman and Subono marched with the ETU in Queensland for their May Day march with 40,000 community members, unionists and activists. Union Aid Abroad – APHEDA activists in Brisbane reported after their public meeting with Darisman and Subono that “Their facts and stories about the asbestos scourge in Indonesia certainly gave the audience food for thought and affirmed the importance of APHEDA’s work.”

The anti-asbestos activists met with unions, activists and victims groups across the country. They spoke about the need for international solidarity and the challenges they face to win an asbestos ban in Indonesia. Since the first successful compensation case for a worker with an Asbestos Related Disease (ARD) in 2016, activists have built up and supported victims associations. They said that two of the biggest challenges to winning compensation for workers in asbestos factories are archaic laws and a lack of knowledge in the medical community. The campaign is growing from strength to strength, and as Subono told audiences including the Asbestos Diseases Society of Australia in Perth, “We are not victims, we are fighters”.

In Victoria, Darisman and Subono spent time in Melbourne and visited the Latrobe Valley and Gippsland which has the highest rates of asbestos related disease in the state. They visited the Asbestos Council of Victoria and the Gippsland Trades and Labour Council and briefed these organisations on the Indonesian campaign.

In NSW Darisman and Subono met with organisations including the ETU and discussed how illegally imported asbestos products produced in Asia still find their way into communities and workplaces here. Apprentices are being trained to recognise asbestos in both historical and new materials.

Union Aid Abroad members who are interested in visiting LION and SERBUK in Indonesia to see their ban asbestos campaign in person can read more about the upcoming Asbestos Solidarity Tour in September here. The Solidarity Tour will visit ban asbestos campaign work in Vietnam and Indonesia. You will get a first-hand look at movement building and organising for asbestos bans in Asia and how you can support the campaign.

To find out more about Union Aid Abroad – APHEDA’s Asbestos. Not here. Not anywhere. Campaign and how you can get involved, visit www.apheda.org.au/asbestos or contact Emma.

WATCH: Darisman and Subono’s presentation in Perth on May 9, 2018 about the on-going fight to ban asbestos in Indonesia.