Asbestos in the Vietnamese News!

In June our Campaign Coordinator for the Elimination of Asbestos Related Diseases Phillip Hazleton appeared on Vietnamese TV as part of a program called Roadmap to banning white asbestos in Vietnam by 2023. The program featured Vietnamese Asbestos Ban campaigners and Union Aid Abroad arguing against the misinformation spread about this dangerous substance as well as footage of Australian victims of Asbestos Related Diseases.

Hard work by our partner organisations in Laos, Union Aid Abroad and other international organisations has led to an exciting announcement in Laos this week as the Minister of Labour has backed an asbestos ban by 2020. Though there is still a way to go to a final ban announcement, pressure on the Government and the chrysotile asbestos industry is growing. Congratulations to everyone who has worked on research, lobbying, awareness raising and movement building to help make this happen.

For a substance to be listed on annex III of the Rotterdam Convention all parties to the treaty must agree. If the countries can’t meet consensus then the substance won’t be listed. Though some important countries have moved from blocking to supporting the listing of crysotile (white) asbestos, there are still some states which are blocking it including Russia, ones of the biggest miners and exporters of asbestos. In early June a meeting took place in Latvia to discuss strategies to increase the effectiveness of the Rotterdam Convention. In the meeting Australia, the EU representative, Canada, Bahrain and Ecuador all proposed mechanisms to break the stalemate that allows one country to block the listing of a dangerous substance. The push by these countries to have a more effective Rotterdam Convention could result in the successful listing of chrysotile asbestos. We’ll be watching upcoming meetings closely to monitor this process ahead of the next biennial meeting next year.

Union Aid Abroad – APHEDA receives generous support from unions to fund the campaign to end asbestos. Following a great show of solidarity from 500 members at the ETU Vic Branch Delegates’ conference in May, the Branch Council confirmed a contribution of $10,000 to the Asbestos. Not Here. Not Anywhere. campaign this month. We would like to thank the ETU Victoria and all Unions that support our work. 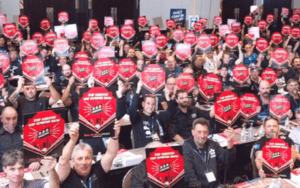 We are currently seeking Expressions of Interest for the Asbestos Ban Movement Solidarity Tour to Vietnam and Indonesia in late September. Please let us know if you would like more information. The information sheet can be found here.