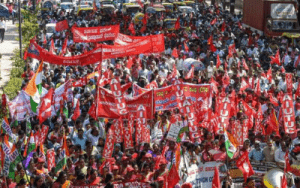 The India General Strike (Bharat Bandh) in January 2019 exceeded the expectations of the trade unions who organised it with 200 million workers participating. Sudhershan Rao Sarde, former South Asia Regional Secretary of IndustriALL and now advisor to the Secretary of Indian National Trade Union Congress (INTUC), shares his insights into the strike that stopped India!

Bharat Bandh: At a Glance

The General Strike of 8-9 January 2019, popularly known as Bharat Bandh (literally means India closed-India Stops) has to be seen as a joint and collective effort of the ten national trade unions and industrial federations against the neoliberal policies of successive governments at national and state levels since 1991, and also against the present government. The general strike was a phenomenal success and may be termed as historical also, owing to its overwhelming response. A 12 point charter of demands arose against the backdrop of the Modi Government’s attack on working people and trade unions to erode the hard-won rights of workers achievements after decades of sacrifice. The demands also highlight the failure of the nearly three decades of economic reforms and to bring back onto centre stage, the workers agenda of inclusive and equitable growth, distributive justice and democracy at the workplace and ratification of ILO core conventions. Approximately two hundred million workers participated in the strike beyond the expectations of the striking unions. The timing of the strike and the demands coincided to reflect the aspirations of the working people, common masses and disenchantment with the ruling elite.

India faced a serious balance of payments crisis in the year 1989-90. To tide over the crisis, the government of India negotiated a loan with the International Monetary Fund in 1991, accepting structural adjustment. This paradigm shift resulted in large-scale casualization, in-formalization, deregulation of labour market and liberalization of labour inspections and gradual scaling down of Social Dialogue. This strike is a continuation of a series of work stoppages, demonstrations, marches to parliament and legislative assemblies, various forms of protests and agitations that national trade unions and industrial federations have been conducting since 1991. Due to its diversity and scale, India has pluralistic traditions in the trade union movement. Trade unions have strong affiliations with political parties and this relationship is reflected in the trade unions attitude towards governments. Since 1991, successive governments both at the national level and at the federal level has followed a neoliberal agenda with a political consensus on neoliberalism in general amongst all the political parties either as a matter of choice or compulsion. The neoliberal development model is firmly entrenched with no alternate model on the horizon.

The timing of the strike coincided with a spontaneous outburst of the people and majority of the political parties, as the people have been reeling under price rises, unemployment, loss of jobs, demonetization and closure or malfunctioning of MSME’s, faulty implementation of the goods and services tax (GST), attacks on Dalits, religious minorities and a shrinking of democratic space. With the exception of the Bharatiya Mazdoor Sangh (BMS) trade union (affiliated to the ruling right-wing BJP), all other national trade unions and industrial federations and opposition political parties supported and participated in the general strike. The strike received support from many political parties who are opposing the present government for various reasons of their own, and provided an opportunity to say the government is anti-worker and anti-people. Under the Indian Constitution, labour is on the concurrent list, which means both the national government and federal governments can legislate upon. Lately, the federal government, in its bid to attract investments both overseas and domestic, has been offering concessions and a union-free industrial environment. The attack on labour by both national and federal governments resulted in a total breakdown of consultation process and further labour flexibility and deregulation/liberalisation of labour inspections. The government right from the time it came to power, was visibly pro big business and anti-worker. It supported employers and weakened the process of social dialogue, and bypassed the established traditions of recognition and dialogue by promoting BMS for partisan reasons. All these factors put together have made the trade unions antagonistic to/against the government. Though in-formalisation of employment was initiated in 1991, the present government made efforts to speed up the process of further insecurity of employment by proposing the removal of regular employment conditions. All national trade unions have experienced the disastrous consequences of the nearly three decades of the neoliberal development model, on the society in general and trade unions in particular. While India has achieved growth rates sometimes at very impressive levels, policies have led to jobless growth and inequality. The inequality in the society is so glaring that India’s top 1% of the population now holds 73% of the wealth while 67 crore citizens (670,000,000 citizens), comprising the country’s poorest half saw their wealth rise by just 1%. (Oxfam Report)

Collective bargaining in India is generally enterprise based, except the large public sector establishments where negotiations are held at the industry level. As such, there is a very serious and internecine competition amongst the national unions at the enterprise level and also industry level. Carrying forward the message of collective actions to the grass roots level and the rank and file is not an easy job, nevertheless the organizers of the strike have done a commendable job in not only mobilizing the workers of the organized sector but also roping in the workers of the informal sector/unorganized sector, most of whom are not members of any union. Elaborate preparations were made by organizing national level, federal state level, district level, enterprise level and also industrial areas. Further worker conventions were held along industry lines, such as among workers in petroleum, telecom, road transport, electricity, defence factories, post and dock, financial sector and unorganized focusing on their specific demands and co-timing them with the strike to exert the maximum influence possible. The top leadership of the striking unions are to be congratulated for the timing and the groundwork which transformed the general strike into a major national action by the majority of the opposition political parties and mass organizations.

The strike was widespread across the length and breadth of the country barring a few states where the impact of the strike was minimal. In many states there was virtual stoppage of public and private transport, industrial establishments, services and educational institutions. The trade unions were successful in converting the general strike into a national stoppage known as Bharat bandh (which literally means India closed-India stops). This strike has been a phenomenal success beyond the expectations of the striking unions. The success of the strike among other things could firmly be grounded in two aspects, the first being mobilisation of informal workers and secondly, obtaining support from all those political parties and mass organisations opposing the national government. The impact of the strike is amplified by the participation of all stakeholders, which made the strike impact beyond the expectations of the striking unions. It is estimated that 200 million workers participated in the general strike, barring BMS and some regional unions, with the strike witnessing the maximum participation of any action since 1991. Though the BMS is critical of the present government as regards labour issues, it supports the government by abstaining from joint and collective actions such as this strike. This strike has given a new ray of hope to the working people about the unity and solidarity of the national trade unions and industrial federations and could well be the harbinger of trade union unity. The largest trade union INTUC demonstrated vision and solidarity by cutting across political and ideological affiliations in the larger interests of working-class unity. This general strike, like previous ones, did not receive due coverage from the visual and print media commensurate with its impact, barring a couple of newspapers and media channels. Labour is not a subject of discussion or concern for the mainstream media. Notwithstanding this, the strike has received considerable coverage and interest due to the political significance it represents in the context of an upcoming election in April.

This general strike generated public attention on a very wide scale but could not bring the government to the negotiation table yet. However, the strike found its echo in the government announcing a pension for unorganized workers in the budget this financial year. The national trade unions have a long way to go on issues of maintaining unity and joint strategy, for a negotiated settlement on the 12-point charter of demands, and until then the struggle has to continue through such strikes even without immediate results. Since the strike the struggle continues with continued industrial action such as a three-day strike of ordnance factory employees, a three-day strike of telecom employees and preparations of Central and State government employees campaigning to retain their pension scheme. For workers in India the struggle continues!