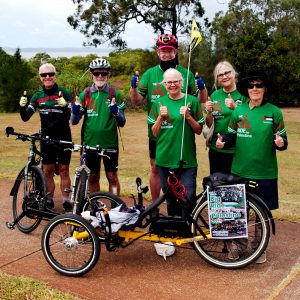 Supporters of Palestine jumped on their bikes between 25 September and 10 October to participate in an international solidarity event known as the Big Ride for Palestine. This was the fifth time the event took place in Australia. The event was coordinated by activists in Brisbane and is designed to raise awareness of ongoing human rights issues facing Palestinian people.

This year a total of $51,129 was raised through donations from 716 people, a big increase on last year. Several unions also supported the event, including the Electrical Trades Union, Construction Forestry Maritime Mining And Energy Union and the Maritime Union of Australia.

Union Aid Abroad – APHEDA will send the funds to the Palestinian Women’s Humanitarian Organisation in Lebanon, an organisation set up and run by women in the refugee camps. With all of Lebanon plunged into political, social and economic turmoil, and badly impacted by Covid-19, the refugee communities are struggling to maintain casual employment, and access electricity, water, food and health care. Cuts by some Arab and Western governments (including Australia) to the UN Relief and Works Agency, mean that basic education and medical services for Palestinian refugees in Palestine and neighbouring countries are increasingly constrained. 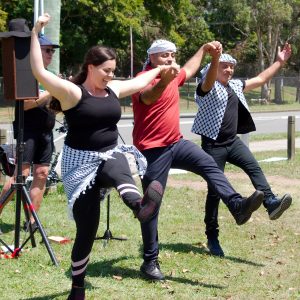 Over the 15 days of the event, 115 riders and walkers had completed more than 11,720 kms Australia-wide. The Grande Finale was held on 9 October in Yeronga, Brisbane, with a 25 km ride, speeches and dabke dancing.

The Big Ride is not about charity, it is about expressing visible solidarity with the Palestinian struggle for self-determination and the right of return. The team in Brisbane produced jerseys to promote Palestinian freedom. Thanks to Lachlan Hurse and Ian Curr and everyone who made the Big Ride a success.