The Big Ride for Palestine is happening again from August 13 – 28. This year money raised will be donated to the Palestinian Women’s Humanitarian Organization. Read about the important work they are doing with Palestinian refugees in Lebanon. 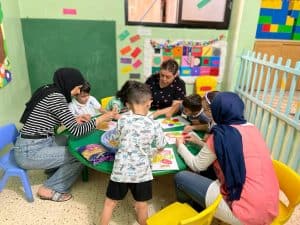 The PWHO organise summer activities for children in kindergarten.

The elections in Lebanon in May have not resolved the deep political, social and economic crisis that has been unfolding since August 2019. Shortages of food, fuel, foreign exchange, medicines, water and electricity are impacting most people. The situation of refugees in Lebanon is even more precarious, with most only allowed to do day-by-day casual jobs. Covid-19 has also badly impacted Lebanon, with a per capita death rate 5 times that of Australia.

Union Aid Abroad – APHEDA has had development projects with the Palestinian refugee women in Lebanon since our foundation in 1984. They have built a strong organisation called the Women’s Humanitarian Organization, which works with ten communities to identify needs and activities, within a framework of health promotion, universal human rights, feminism, child rights, and refugee rights.

The focus of our project in recent years has been on early childhood education, enabling refugee children to enter the school system with a good education basis, or basic numeracy, and Arabic and English literacy. The women identified this need not only because education is the only avenue the refugees can take to have some self-determination, but also, knowing their young children are in a safe place enables women to work or pursue their own education.

In Burj el Barajneh camp, which is 250m by 300m, almost 40,000 refugees live in very overcrowded conditions. Refugees from Palestine, and Syria who arrived after 2011, are excluded from employment, services and political rights in Lebanon. Camp communities are excluded from legitimate connection to phones, water systems and the electricity grid, and informal electrical wiring causes great risk. The organisation has been assisted with its own electricity supply and has worked with donors on making the electrical connections safer. With food prices rising steeply, the organisation is assisting children and vulnerable families with food and basic supplies.

The camp has few places for children to be able to play in open space, and isolation of the whole camp community has been intensified by the economic, security and pandemic crises. The poverty, overcrowding and the dire regional situation creates great stress on households, and traumatises children. With additional funds from the Big Ride for Palestine in Australia, the Women’s Humanitarian Organisation was able to initiate sport and outdoor recreation clubs for children, in nearby safe spaces, with a very positive impact on the physical and psychological health of the children.

Register your interest in the Big Ride for Palestine here. Participants fundraise as they ride, walk or run their nominated distance. Along with raising money, it also brings attention to the human rights abuses endured by the Palestinian people, the brutal military occupation of Gaza and the West Bank, and Israel’s continued violation of international law.