By Brahm Press , Director of MAP Foundation, based on the Thai-Burma border

MAP Foundation’s mission is “to empower migrant workers from Burma and their communities to take action to claim their rights, in part by ensuring that migrants have full access to up to date information on rights, policies and laws in their own language; and to fight discrimination against migrant workers, especially women and families, so that they can receive their full labour rights, are healthy, their children go to school, and they are able to integrate into Thai society”.

A group of Burmese migrant workers won a huge victory after fighting for lost wages. They were being paid less than a dollar an hour at the Kanlayanee clothing factory in Thailand, making clothes and toys for Starbucks, Disney and NBC. With assistance from Migrant Assistance Program (MAP) Foundation, they campaigned for two years to successfully receive backpay.

In August 2019, MAP invited a Reuters reporter to Mae Sot to look at the issue of underpayment of wages to migrant workers in factories in the area, especially in the garment industry. After a couple of days looking around, we found workers from the Kanlayanee factory. This was a small-medium sized factory with 50 workers. Reportedly, the factory was producing aprons for Starbucks and was underpaying its workers. We also met workers who previously passed our paralegal training who were working at another factory called Cortina Eiger (workers called it A One), producing for the sports company, Bauer. These were both factories in Mae Sot which were under-paying their migrant workers to produce wares for US companies. 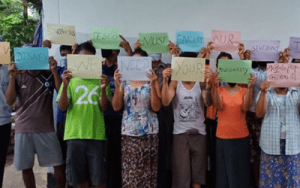 When the story was published, it caught international attention because US companies were involved. It also immediately caught the attention of the Office of the International Thai Police, which is the section of the police responsible for anti-trafficking efforts. They saw this as a potential embarrassment for Thailand. So, they sent a police force from the Thai Anti-Trafficking in Persons Task Force (TATIP) to the two factories. This also made big news. In early September 2019, TATIP made a snap inspection in the two factories. They found migrant workers had their labour rights violated, but were not in conditions considered as trafficking. For this reason, the case was passed onto the Labor Rights Protection Office, Mae Sot branch, Tak Province.

Soon after, on 26 September 2019, the Kanlayanee factory closed without prior notice, supposedly because Starbucks withdrew its order. At that point, it was not yet known about the other brands being produced by the factory.

Out of 50 workers, 26 of them decided they wanted to take the case for redress and approached MAP. This group had passed through para-legal training activities by MAP on labour rights and collective bargaining while previously working in different factories, so they were familiar with what this entailed. The other group of workers stayed with Kanlayanee and worked at a smaller, home factory under similar conditions.

In cases like this, where there is an abrupt closure of a factory, as the law allows, it is common to demand claims for two years of retrospective unpaid back wages or improperly paid back wages below the minimum wage, as well as unpaid overtime, including working on days off and holidays, in addition to severance pay. According to these rules, the Labour Protection Office (LPO) officers made a ruling against the Kanlayanee factory, calling for payment of approximately 3.46 million Thai Baht or just around US$115,000 to the workers. The employer (Kanlayanee Ruengrit) appealed the order, but it was refused and the order was enforced.

In January 2020, MAP consulted with the international organisation Workers Rights Consortium (WRC) about poor auditing practices by brands. We also asked them to approach Clean Clothes Campaign (CCC), an international network of which MAP is already a member, for advice. CCC recommended that the workers should write a letter to Starbucks. When they did that, we realised there were other brands involved. However, the workers needed coaching on how to identify the brands. From this process we found that besides Starbucks, Disney, Tesco, and NBC Universal also sourced their products from the Kanlayanee factory.

The workers sent a letter to all the brands in April 2020. Tesco, Disney and Universal responded, recognising the workers, but did not take any action. Starbucks did not acknowledge the workers. The workers sent another round of letters to the brands in early May and included CCC, MAP and WRC. We coordinated with CCC’s Urgent Appeals section. They helped contact Reuters to follow up the story.

MAP, CCC and WRC worked together along with our community partner CBO “Arakan Workers Organization” (AWO) to maintain contact between the workers and the brands. CCC helped by following up and pressuring the brands; WRC gave advice and technical support, while AWO helped to organize the workers. MAP played a coordinating role. Funding for advocacy, networking, coordination and case support came from CCC and other donors (such as Freedom Fund and Diakonia). Legal assistance was provided by Human Rights and Development Foundation (HRDF) with support from ADRA.

Around the same time in April 2020, the owner of the Kanlayanee factory wanted to negotiate with the workers, but started at 500,000 Baht in total. There were a couple of rounds of negotiation, but they were unsatisfactory. At the same time, CCC helped us contact Tesco UK, who was positive about finding a solution, and NBC Universal, who denied responsibility. Starbucks and Disney, did not respond at first.

A couple of the workers went back to Burma during a lull in COVID restrictions – one person’s husband was sick, the other went to deliver her child. Almost all the workers who stayed found it difficult to find regular work. Many are older and find it hard to compete in the workforce, but many have also been blacklisted and can only find daily work which lacks any long-term security. The situation has been exacerbated by COVID restrictions and the related impact on the economy. In fact, most of these workers were very poor and had to survive by eating foraged vegetables, rice and chili paste for long stretches.

On 31 August 2020, HRDF and MAP Foundation officially filed a case against the employer, Kanlayanee Ruengrit, with the local regional Labor Court. COVID restrictions slowed the process.

While waiting for the courts, CCC and MAP were in direct negotiations with the brands. NBC Universal, insisted that the fault was with the bad personal behavior of the licensee, who they felt was corrupt and should pay. As we came closer to the court date, CCC also helped to produce advocacy media that went viral to pressure the brands. The workers helped deliver messages through videos and images showing the difficulty of their lives as part of the media strategy.

NBC Universal: You're Next! Pay your Kanlayanee migrant workers from Clean Clothes Campaign on Vimeo.

On 4 November 2020, the court initiated mediation. The owner of the Kanlayanee factory insisted she was bankrupt and the most she could pay was a little over 1 million Baht. The workers insisted on receiving the full amount. Our team encouraged the workers to assess the situation about the likelihood of getting paid fully and consider a strategy accordingly, which included the possibility of some or all the brands contributing.

After much discussion, workers agreed to accept the amount offered from the employer, partly because they saw the reality of not getting the full amount ordered by the Labour Protection Office from her, and the courts were pressuring the workers to accept less. So, finally in November, the court ordered Kanlayanee to pay 30% of the total, or around 1.1 million Thai Baht, and the workers accepted. The amount was paid then and there.

Then, with assistance from CCC and the Business & Human Rights Resource Centre, we asked the brands to pay a portion of the remainder divided between the four of them, or not even 600,000 Baht or around $20,000 USD each company. Tesco was the first company to take responsibility and paid outright at the end of November plus some extra for MAP to use in labour protection activities. In mid-December, Disney and Starbucks also paid. So, we made a video to thank them and continued to pressure NBC Universal. Meanwhile, Reuters was covering the situation and giving updates on who was paying and who was not. 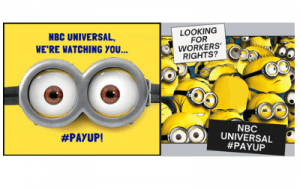 That left NBC Universal. So, we targeted our media to NBC Universal and the “minions” characters from “Despicable Me” – which is the products that the workers made. There were videos and photos of workers dressed as minions doing the same things to survive as the workers, such as foraging for vegetables. At the International Migrants Day event the workers dressed as minions and danced as part of the “Pay Up” campaign calling out “to be paid.” CCC had their own “minions” campaign including spoof cartoons, a letter on move-on.org, and videos by the representative of the actors’ guild.

Victory for the workers

In late February, NBC suddenly approached MAP and CCC saying they would pay. They sent the remainder plus a little extra, which we are putting in a fund to help workers expedite labor cases just like this one. The migrants were just paid the final amount at the beginning of April 2021.

The workers have expressed their happiness at being paid fully. Their excitement grew each time a brand agreed to pay. At first, they were disappointed with the slow response of the brands, but are glad they persevered. They were truly ecstatic when they received the final payment from NBC Universal.

The workers paid off debts and remitted money to their families. They also jointly decided to use the funds to help improve a Workers’ Center (by Arakan Workers’ Organization) to help receive similar complaints from other workers, and put together funds to purchase dried foods to assist other workers who are out of work due to COVID-19.

NOTE : Burmese migrant workers in Thailand are not allowed to form their own trade unions or run for election on the executive committee of a Thai trade union. Although migrants are allowed to join existing unions, only 3% of the Thai workforce is unionized, most unions are based in Bangkok and struggle to organise across the many languages of Burmese migrants.