In a major breakthrough in the campaign to ban asbestos, the Indonesian city of Bandung has announced that they will be expanding their asbestos ban to include all new private houses!

This goes even further than Bandung’s 2018 decision to ban asbestos in new commercial buildings. In practice, it will mean that the city won’t approve planning applications with asbestos products. The ban is a huge win for the campaign to end asbestos use in Indonesia!

In recognition of Bandung City Assembly being the first region in Indonesia to announce an asbestos ban, a certificate of recognition has been awarded by the Asbestos Safety and Eradication Agency (ASEA) for the city’s leading role in efforts to eliminate asbestos related diseases in Indonesia.

Above: Bandung City representatives are presented with a certificate of recognition from the Asbestos Safety and Eradication Agency (ASEA) by Union Aid Abroad – APHEDA Ban Asbestos Campaign Coordinator Phillip Hazelton.

The announcement in Bandung will support more production of asbestos alternatives, build momentum in the campaign to train workers in asbestos safety, and pressure decision makers to go further. 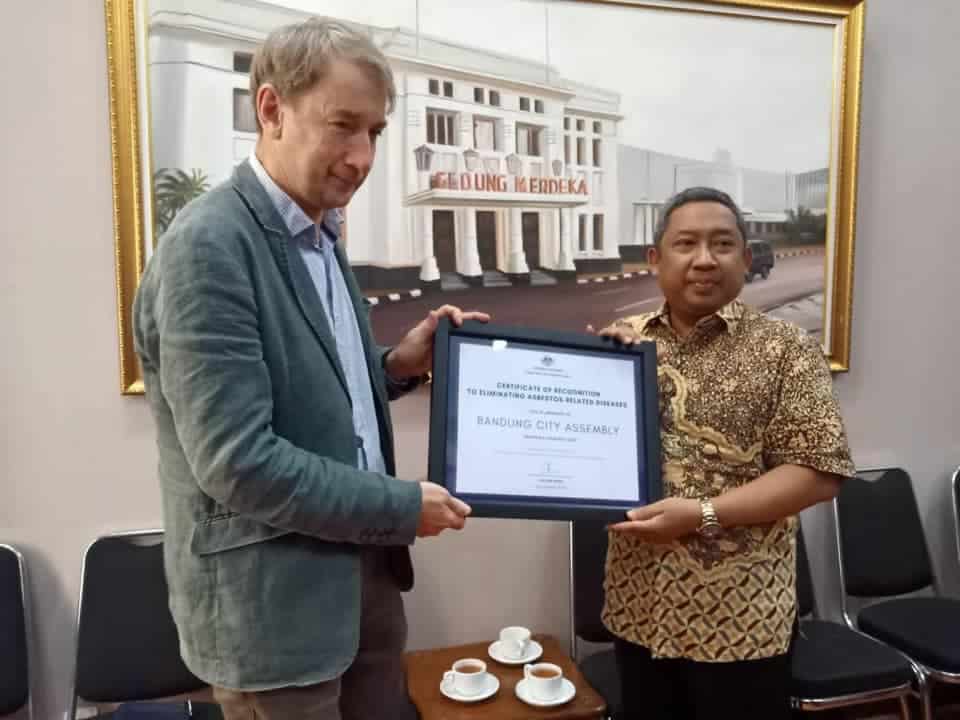 Indonesia imports over 100,000 tonnes of raw asbestos each year. There are around twenty-six asbestos product factories, most of which are located on the island of Java. The majority of the imported raw asbestos goes to manufacturing roof sheets that are used in construction. There are estimates that up to 50% of the roofs in Jakarta are made of asbestos sheeting.

The next steps in Indonesia will be to use the success in Bandung to pressure more local and regional governments to take steps to ban asbestos products in their cities.

Support the campaign to ban asbestos in South East Asia!

In Vietnam, Cambodia, Laos, and Indonesia, our partner organisations are working to secure safe workplaces and communities by banning asbestos. You can support their fight by signing the petition to stop Australian aid and development from financing the asbestos lobby!