Karen women organising on the frontline of Myanmar

By the end of October, the coup in Myanmar had resulted in about 2 million people being in urgent need of humanitarian assistance, either directly from the coup or from natural disasters, including COVID-19. This is on top of 1 million people who were already in need of assistance because of previous crises – with ethnic groups, mostly Karen, Karenni, and Mon often among the most vulnerable to violence.

In November, the UN reported 1,100 murders, 8,000 arbitrary arrests, and over half a million people fleeing for safety from the brutal military crackdown that followed the coup.

In August alone, over 125,000 people were reportedly affected by floods across Myanmar, along with an estimated 1 million people in Northern Thailand – forcing many to flee their homes for temporary shelters.

Although Thailand has begun to relax COVID-19 control measures, including easing internal and international travel, there has been an increase in cases in northern Thailand in recent weeks, where the Union Aid Abroad – APHEDA programs are based. As a result, the movement for refugees and migrant workers remains restricted, limiting access to safe shelter, essential services, food, and other supplies.

Achievements in the last 12 months 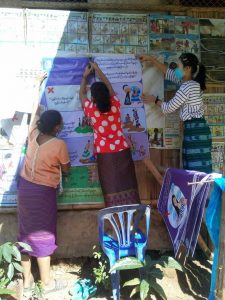 In this high-risk environment, over the past year, the Karen Women’s Organisation (KWO) has balanced the need to continue their important work, alongside the need to protect the safety of their staff and the community. However, within this context, KWO has continued to greatly to building the skills and capacity of Karen women to claim their rights and contribute to the peace and security of the Karen community.

KWO does this by organising and empowering women, supporting education programs targeting girls in refugee camps and in Karen communities where there are gaps in education services. It also raises awareness about health and works to increase access to local health services, and assists communities to solve social problems that affect women in particular.

The Union Aid Abroad – APHEDA project supports KWO in their efforts by contributing to organisational capacity. In particular, to helping KWO maintain a core group of skilled women leaders, staff, and volunteers, through ongoing organising, training, and mentoring.

Despite the many challenges, in the past year alone, and in addition to their other organising, education, and health programs, KWO has delivered four capacity-building training sessions for 61 central level staff of KWO; 42 days of training in seven refugee camps for 158 KWO leaders and staff; fourteen days of training in three districts and one IDP camp within Karen State for 127 KWO leaders and staff; 131 days of training for 4,360 KWO members in the community (including 602 men), in seven refugee camps and within Karen state.

In addition, with support from Union Aid Abroad – APHEDA, KWO also distributed emergency materials to support 569 vulnerable, internally displaced people who had fled for safety from 14 villages in Mu Traw and Kler Lwe Htu districts impacted by the military coup in Myanmar. These included 184 elderly people, 200 pregnant women, and mothers with newborn babies, 185 patients, and people living with disabilities.

Looking towards the next 12 months

Union Aid Abroad – APHEDA will continue to support the Karen Women’s Organisation over the next twelve months to organise and empower Karen Women through our capacity building project. We’ll continue to contribute to Karen women playing a strong role throughout the ongoing crisis and fighting for true democracy in Myanmar.