The challenging task of building union in Myanmar

Founded by a group of Burmese Labour activists in February 2012, Action Labor Rights (ALR) aims to advance workers’ rights through training and education, as well as closely monitoring the behaviour of companies in Myanmar. Since their inception, ALR has focused on supporting emerging labour unions to engage and collaborate together. Union Aid Abroad APHEDA has provided support to ALR since 2012 for the implementation of a ‘Trade Union Capacity Building Project’. This project has focused on building the capacity of enterprise level unions which have yet to affiliate with a larger federation.

The work of Action Labor Rights has never been easy, but in the early days it was particularly challenging. For decades, workers toiled under a military regime that not only denied them the right to organise and advance their collective interests (formation of trade unions was only legalised in 2011), but actively worked against them. Many labour activists were jailed during this period for trying to organise workers. One of these jailed workers was Thurein Aung. Thurein Aung spent several years in prison as a result of his labour activism and is now the Chairperson of Action Labor Rights. If workers tried to organise or demonstrate against employers, they often faced threats and violence from local government authorities and police.

Given this history, when unions were legalised in 2011 most workers were unaware of the role of trade unions in the world of work. If they did have knowledge of unions, it often meant they were fearful that union activism would lead to reprisals from the authorities. This poses challenges to organising, and it hasn’t been simple to break through this mindset. ALR argues, however, that rather than seeing this as a barrier, it reinforces the importance of their capacity building training and education in better informing working people of Myanmar.

In October 2017 Union Aid Abroad APHEDA facilitated a capacity building trip for ALR representatives to visit India. The objective of this trip was to develop a better knowledge of union organising in the informal economy, particularly in textile and garment manufacturing. In Myanmar, this relates to textile and garment manufacturing in the supply chain but outside of factories; usually women in a home-based production setting. Over 80% of workers in Myanmar are engaged in informal work (which is unregulated), and informal garment production is particularly exploitative. ALR representatives had the opportunity to learn from their Indian comrades at the Self Employed Womens Association (SEWA), Social Awareness and Voluntary Education and the Andhra Pradesh Vyvasaya Vruthidarula Union all of whom have a long history of organising workers in the informal economy. During the trip a research methodology was developed that ALR could use to research and map the informal garment sector in Yangon, the production centre of Myanmar. This research exercise will continue to assist the development of an organising strategy for informal garment workers which ALR and APHEDA plan to launch in 2018. 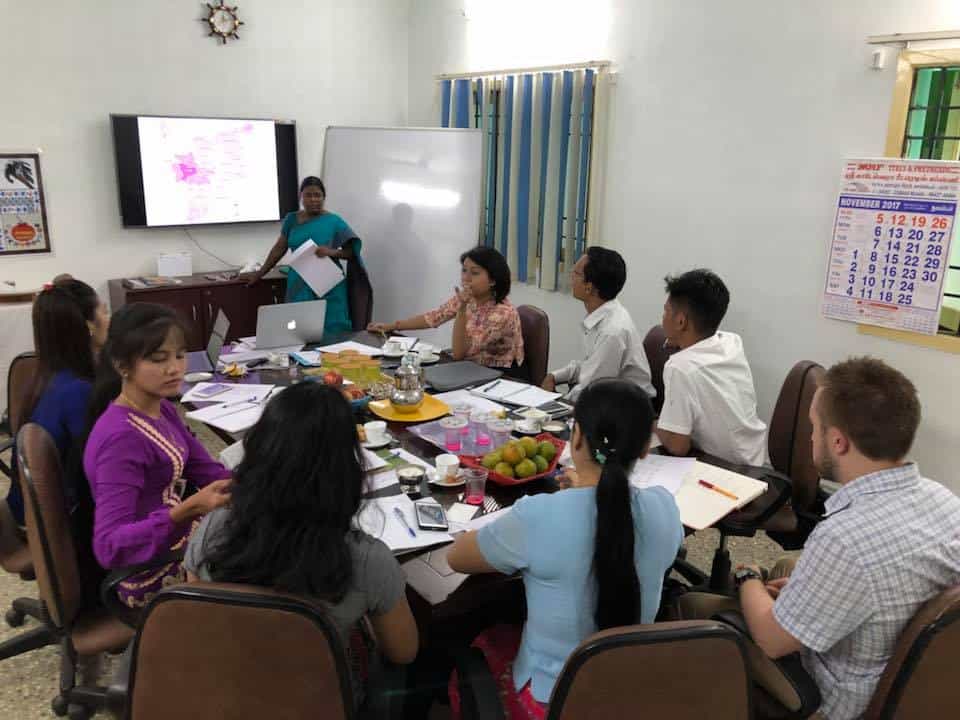 Members of ALR and sister organisation LRDP meeting with SAVE in Tiruppur, India.