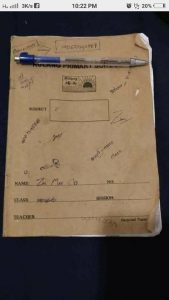 Zin-Mar-Oo took her own life by jumping from a high-rise apartment in Singapore on the evening of June 12.

The Myoh woman from Arakan state in Myanmar had been working as a housemaid in the Interface Condo at 180 Deport Road, according to Khin Lay, a volunteer member of HOME (Humanitarian Organization for Migration Economics), a non-governmental organisation in Singapore.

“She had been intending to jump since 5.30pm and had been sitting in the corridor,” Khin Lay said.

“While she was sitting there, a rescue team arrived.

“When they knew she was from Myanmar they tried to persuade her not to jump and said they would call for a Burmese translator, but she replied that she didn’t want to speak with a translator.

“She asked them just to call her best friend, an Indonesian girl who was her neighbour.

“Zin-Mar-Oo and her friend spoke for a while before she jumped but we are still trying to discover why she decided to do it,” Khin Lay said.

The Interface Condo comprises 24 levels; she jumped from the 18th floor.

During their conversation, Zin-mar-Oo handed a notebook to her friend in which she had written asking for help.

Her notes showed that she usually ate breakfast between 9.30am and 11.30am, then had a small lunch or sometimes nothing at all. For dinner, at 9.30pm, she received two slices of bread and a cup of water.

It is not uncommon for Burmese migrant workers employed as housemaids to commit suicide, HOME activists attempting to assist the women in Singapore say.

“There is a language barrier and they feel depressed when they do not have a good relationship with the householders,” Khin Lay said.

“We don’t know how many Burmese maids are locked up in houses and flats in Singapore as we don’t have the power to inspect residences there.

“Burmese maids have to attend a maid course in Singapore for one day when they first arrive in the country.

“As part of that course, the trainer gives them a contact phone number to use when something happens to them, but as soon as the maids arrive home, the householders take away all of their documents and phones.

“Most Burmese maids are not educated and don’t know how to contact someone to ask for help.”

Khin Lay said the “root cause” of the ongoing situation was “Burmese labour agencies and agents that send these maids to Singapore”.

“Most of the labour agents are very greedy. They don’t care about the welfare of their workers; they just care about numbers, because they receive commission on average of S$3500 ($3340) for every maid they supply.

“The Burmese labour ministry needs to control such agents.

“We are asking the labour ministry to check these agencies and to take full responsibility for the workers they send,” Khin Lay said.