Cambodia sanctioned for its abuses of political, human and labour rights 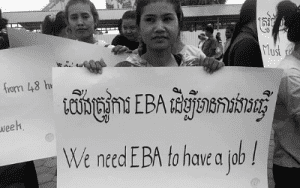 Access to the “Everything But Arms” trade deal partially withdrawn

Under the “Everything But Arms” (EBA) trade arrangement, Cambodia and other developing countries are able to sell all products – except arms and ammunition – in Europe without paying duties or taxes. This preferential trade deal helps stimulate the economies of the world’s Least Developed Countries (as defined by the United Nations).

The EU made the decision to suspend Cambodia from the arrangement based on the deterioration of political, human, land and labour rights. The suspension applies to 20% of Cambodia’s exports to the EU. This means that these exports will be subjected to the same taxes and duties as any other members of the World Trade Organization. However, at this stage, the remaining 80% of Cambodian exports to the EU can still access European markets under the EBA trade arrangement.

“We have provided Cambodia with trade opportunities that let the country develop an export-oriented industry and gave jobs to thousands of Cambodians. We stand by their side also now in the difficult circumstances caused by the pandemic. Nonetheless, our continued support does not diminish the urgent need for Cambodia to respect human rights and labour rights. I stand ready to continue our engagement and to restore fully free access to the EU market for products from Cambodia provided we see substantial improvement in that respect.”

Workers lose jobs due to pandemic and EBA suspension

On top of the economic crisis brought on by COVID 19, the partial withdrawal of the EBA trade deal will result in significant job losses, particularly in manufacturing. The president of the Independent Free Union Federation (FUFI), said the withdrawal would be a blow to garment and footwear workers, adding that more than 10 confederations and unions are affected.

The sanctions will remain until the political rights of opposition members are reinstated and Cambodia shows significant progress on civil and political rights, including freedom of association.

“The Cambodian government is fully responsible for the withdrawal of benefits, and we regret its lack of commitment to Cambodia’s working people. The government and companies doing business in the country must finally listen to the concerns of workers and act to ensure that freedom of association and the right to collective bargaining are fully respected.  The trade benefits should only be restored once the government changes its course on democracy and labour rights. The EU should increase pressure on Hun Sen’s government in order to promote sound labour protection and stop prosecutions of trade unionists.”

Prominent union leader arrested while unions fight to save jobs

Unions are fighting on multiple fronts to save jobs in the short term and protect workers’ rights in the longer term. COVID 19 has resulted in the closure of 256 garment and footwear factories and the loss of many thousands of jobs.

However, the sanctions come into force just days after prominent Labour Leader, Rong Chhun, President of the Cambodian Confederation of Unions (CCU) was arrested on 31 July for speaking out on behalf of farmers who had lost their livelihood and their land as well as calling for the release of unionists who were arrested under new emergency laws introduced in response to COVID 19.

His arrest is seen as an act to curb freedom of speech and silence opposition and underline the importance of the international community’s support for Cambodian Unions in their fight against the erosion of fundamental freedoms.

Union Aid Abroad – APHEDA continues to stand in solidarity with unionists in Cambodia. APHEDA also support calls by the International Trade Union Confederation (ITUC) and the Australian Council of Trade Unions (ACTU) calling for greater respect for the important role of unions, freedom of association and freedom of speech.