A report written by the Cambodian Labour Confederation (CLC), Cambodian Confederation of Unions (CCU),­­ and nine independent trade unions in Cambodia have presented a warning to the International Labour Organization (ILO) about the dire state of workers rights inside the country.

The report says: “Democratic space in Cambodia continues to be increasingly restricted, including the dissolution of the main opposition party, restrictions on independent media as well as a number of major human right organizations.” 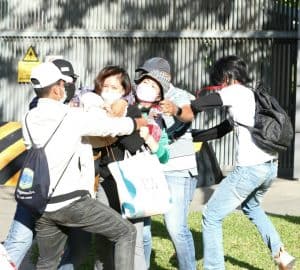 ILO officials visited Cambodia in April in order engage in dialogue with the government about trade union rights. In the lead-up to the visit, a broad range of independent trade unions held five consultation meetings in order to formulate key concerns and recommendations to the ILO.

They agreed that despite similar reports and investigations by the ILO in the past, the situation was getting worse.

The report states: “Rampant abuse of the law by employers abusing fixed-duration contracts, engaging in discrimination and harassment against union leaders and organizers, and a raft of other anti-union practices inhibiting union formation and operation persist. Unions now have few options to exercise their right to organise, their right to represent workers, to negotiate and where necessary to strike.

“The pandemic has impacted independent trade unions, with job losses and membership losses but more fundamental has been the abuse of new COVID 19 restrictions and other laws to limit freedoms.”

The murder of unionists

There has been an ongoing lack of justice in the case of murdered trade union leaders, Chea Vichea, Ros Sovannareth and Hy Vuthy who were murdered 18 and 15 years ago respectively. Seven years after an inter-ministerial commission was established specifically to investigate them, their cases remain unsolved. 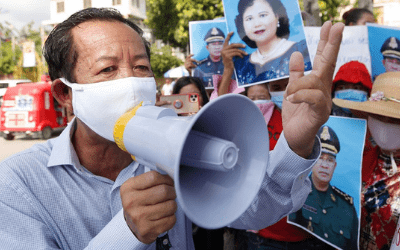 Rong Chhun is the president of the Cambodian Confederation of Unions (CCU). He was released in November last year after spending more than 12 months in prison for union-related activity.

There have been 58 criminal cases against unionists for exercising legitimate trade union rights since 2018. In some cases, even the accused are not informed of the status of their cases.

Policing of strikes and protest rallies

The report noted there was a “culture of impunity by police officers who use excessive force against protesting unionists. Acts of physical and verbal abuse by armed officers against protesters, denying protesters basic needs including access to public toilets, food and water were used against union members who had been peacefully picketing to demand negotiation over the mass layoffs at NagaWorld casino since last December.”

The right to freely associate

According to the report: “Requirements for trade union registration are still excessive, intrusive and interfere with trade union independence. Lengthy delays of months through the registration process, mostly at the discretion of responsible departments based on spelling and grammar mistakes or amendment of the filing date of the application persist.

“Workplace harassment and discrimination against union members continues to be rampant in practice. The independent unions condemn tactics by employers to undermine union activity. Union members are routinely targeted and overrepresented in terminations of Fixed Duration Contracts and in redundancies, in many cases they are over policed to build cases for underperformance or misconduct, as grounds for termination.”

The report also noted that collective bargaining remains difficult, the right to strike is not protected, and recent laws have impinged on a broad range of rights such as freedom of expression, association, assembly, and privacy.

The report ended by requesting that the ILO oversees the Cambodian government’s implementation of their recommendations, as well as provide capacity building to the independent unions so they are able to monitor how the recommendations are implemented.